To say that this afternoon’s game between the Winnipeg Jets and Carolina Hurricanes is big would be the understatement of the year. 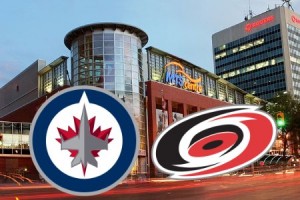 The Story: To say that this afternoon’s game between the Winnipeg Jets and Carolina Hurricanes is big would be the understatement of the year.

The reality is the game is massive.

Winnipeg lost 4-0 to the Pittsburgh Penguins on Thursday night and will look to get back into the win column today after a disappointing effort in their last game against the best team in the Eastern Conference, and arguably, the entire National Hockey League. Despite Thursday’s loss, the Jets still hold down 3rd place in the East via their Southeast Division lead and are six points up on Carolina (1oth in East) and seven points up on the Washington Capitals (11th in East) for the division lead.

Carolina enters today’s game on a four game losing streak. After losing 4-1 to the Jets on Tuesday, the Hurricanes were defeated 6-3 by the Toronto Maple Leafs and have won just two of their last 10 games, remarkable for a team loaded with offensive talent.

Similar to the Winnipeg Jets, the Hurricanes have been wildly inconsistent this year and have struggled on the defensive end of the game. Carolina is ranked 22nd in the NHL in goals against per game (2.97 goals/game, Winnipeg is ranked 21st, 2.89 goals/game) and are currently without the services of number-1 netminder Cam Ward, who has missed the last month with a knee sprain.

26-year-old Justin Peters has played the last two games for the Hurricanes and has played 7 games this year with a record of 2-4-0, a 3.18 Goals Against Average and .899 save percentage. Ellis will accompany the Hurricanes to Winnipeg but it is not known if he will start tonight as he also been suffering from a leg injury.

One of the key matchups in today’s game will be Carolina’s number 1 line of Jiri Tlusty-Eric Staal-Alexander Semin against the Jets No.1 defense pairing of Tobias Enstrom and Dustin Byfuglien. The trio of Tlusty, Staal and Semin have put up big offensive numbers all year and the result of tonight’s game will have a lot to do with the Jets ability to shut down these three forwards.

Ondrej Pavelec is expected to start in net for the Jets tonight. It will be Pavelec’s 32nd start of the season.

This is the third of four meetings between Carolina and Winnipeg this year with the Jets leading the season series with two wins (4-3 win on February 21st and 4-1 earlier this week). The fourth and final meeting of the season between the two teams takes place on Thursday April 18th in Winnipeg (7:00 p.m. CST).

QUICKIES….The Jets have played 7 afternoon games so far this year and their record is 2-4-1……