The Canes return to Winnipeg for a re-match with the Jets sporting a new coach and coming off a 5-3 win in Edmonton. 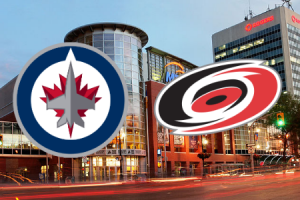 The Story: The Winnipeg Jets wrap up a five-game home stand tonight at the MTS Centre against the Carolina Hurricanes (7:30 p.m. CST) looking to win four games in a row for the first time this season.

After losing to the Ottawa Senators last Tuesday, the Jets have defeated the Phoenix Coyotes, New Jersey Devils and Boston Bruins in consecutive games and now sit in 12th spot in the Eastern Conference with 28 points (12-11-4).

The Hurricanes come into town on the heels of a massive 5-2 win over the Edmonton Oilers on Wednesday night which snapped a six-game losing streak and gave new Head Coach Kirk Muller his first win in five tries (The Canes enter tonight’s game dead last in the Eastern Conference and 28th in the NHL with 22 points).

The Jets and Canes have already met twice this year with the the Jets coming out on top in both games (5-3 win on October 22nd and 3-1 win on November 25th). The constant for the Jets in those two victories was balanced scoring, forechecking, discipline, and of course, goaltender Chris Mason. The 35-year-old puck stopper from Red Deer, Alberta has earned two victories this season and they are both against the Hurricanes. In fact, Mason’s last start was against the Hurricanes exactly two weeks ago, in what was his first game back from an injury that kept him out of the line-up for almost a month. Mason has started only five games this year, because starting Number-1 goaltender Ondrej Pavelec has been on fire this season, starting 17 of the last 18 games for the Jets, including thirteen games in a row from late October to late November.  Mason revealed at the IcePlex yesterday that he will be starting in net for the Jets tonight.

The Jets approach for tonight’s game may be slightly different as the Jets will be playing in the first of back-to-back games, the second one coming tomorrow in Detroit against the Red Wings. On Tuesday night, the Jets defeated a tired Boston Bruins team who arrived into town late Monday night after defeating the Pittsburgh Penguins 3-1 on the road. The Bruins were so tired that super sophomore Tyler Seguin slept in and missed his team’s morning meal, which led to him being a healthy scratch. The Jets game tomorrow may have factored in to Coach Claude Noel‘s decision to start Mason tonight.

*** Game Day Update: Jets forward Nikolai Antropov and defenseman Randy Jones will be in the line-up tonight for the Jets. It is not yet known who will come out of the line-up for the Jets but stay locked to IllegalCurve.com for more details.

Who’s Next: The Jets hit the road for their next game which is tomorrow (Saturday) against the Detroit Red Wings at Joe Louis Arena (6:00 p.m. CST, CBC’s Hockey Night in Canada). The Jets then return home to commence a six-game homestand beginning on Tuesday, December 13th versus the Minnesota Wild.

NOTES…..Nikolai Antropov is expected to play on a line with Andrew Ladd and Kyle Wellwood…..According to Tim Campbell of The Winnipeg Free Press, Jets defensemen Tobias Enstrom and Derek Meech are still weeks away…..Jets centre Jim Slater won 15 of 22 face-offs in Tuesday’s game against the Boston Bruins. Slater is ranked 27th in the NHL with a 53.1% faceoff winning percentage….. Dustin Byfuglien leads the Jets with 104 shots, which is third most in the NHL. James Neal of the Pittsburgh Penguins leads the NHL with 114 shots, followed by Eric Staal with 107 shots. Evander Kane sits in fourth with 103 shots…..Jets defenseman Mark Stuart has blocked 74 shots so far this year, which is 2nd most in the NHL. Habs d-man Josh Gorges has blocked 76 shots this season…..