The last time a Boston team played in Winnipeg was the last official NHL New Years Evening game on December 31st, 1995, a 5-3 Bruins win. Will the Jets 2.0 fair better? This current edition of the Bruins is riding a 9-0-1 streak into Winnipeg. 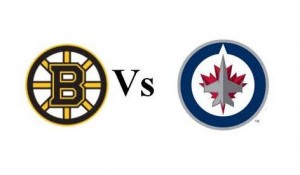 The Story: The Winnipeg Jets are on a two-game roll right now and will look to continue their positive momentum tonight at the MTS Centre when they welcome the defending Stanley Cup Champions, the Boston Bruins to town (7:30 p.m.).

The Jets defeated the New Jersey Devils 4-2 on Saturday night to reach .500 (11-11-4) for the first time this season but it will not be easy to hold that position as they continue their current five-game home stand against the hottest team in the NHL right now. The Bruins are undefeated in their last 15 (14-0-1) and did not lose a game in the entire month of November.

The Bruins defeated the Pittsburgh Penguins 3-1 Monday night and come to Winnipeg with enough confidence to make Lil’ Wayne jealous. The Jets lost to the Bruins 4-2 just 10 days ago (November 26th) but the Jets are also feeling pretty good about themselves coming off convincing wins against the Phoenix Coyotes and New Jersey Devils.

Goaltender Ondrej Pavelec continues to be an incredible story for the Jets. Pavelec made 23 saves against the New Jersey Devils on Saturday night and improved his record to 9-9-4. Pavelec has steadily improved his play since the October 27th game against the Philadelphia Flyers (9-8 win) when he allowed 7 of 8 goals (Chris Mason came in briefly and allowed one goal). Pavelec has made several key saves and has been the Jets best penalty killer and most consistent player. Pavelec’s stellar goaltending has been one of the main reasons why the Jets have been able to turn their season around.

The unlikely hero in Saturday’s game was Jets defenseman Mark Stuart, who scored the game’s winning goal (his 3rd of the season) on a sharp angle shot that fooled Devils goaltender Johan Hedberg. Stuart has been an absolute rock on defense in every game he’s played and is the team’s best shotblocker on defense. Stuart’s positioning is excellent and he has the ability to make bone-crunching hits which has made him a fan favourite here in Winnipeg.

The Jets will again be looking to carry their previous performance ahead to tonight’s meeting with the Bruins.  Head Coach Claude Noel will want another one of his 60-minute performances and he will want his squad to come out with lots of energy, especially considering that Boston played last night and plays three times in four nights.

Jets Lines will be the same as last game with Ondrej Pavelec getting the start.

NOTES…..Jets goaltender Ondrej Pavelec has started 17 of the last 18 Jets games…..Evander Kane’s 14 goals is tied for third most in the NHL. Phil Kessel of the Toronto Maple Leafs and Steven Stamkos of the Tampa Bay Lightning have 16 goals apiece. Kane is only five goals behind his career best (19), which was set last season with the Atlanta Thrashers….. Forward Jordan Caron and defenseman Steven Kampfer are travelling with team and may play tonight versus the Jets. They were healthy scratches last night against Pittsburgh…..The last time a Boston team played in Winnipeg was the last official NHL New Years Evening game on December 31st, 1995, a 5-3 Bruins win…….Current Bruins President Cam Neely scored 2 goals that day against the Jets.