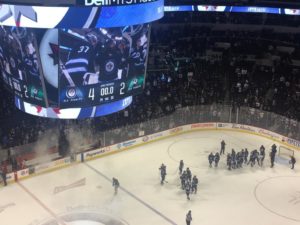 1st:
– The captains almost dropped the gloves just as the first puck was dropped to start the game;
– Benn and Wheeler would chat throughout the 1st period;
– Stars starting goalie Ben Bishop made a brilliant save on Bryan Little but was injured and left the game;
– Benn took out Wheeler late in the 1st and the Jets went to the power play in a ho-hum opening period;
– With 0.4 left Patrik Laine scored his 42nd goal of the season to give the Jets a 1-0 lead;
– Assists to Wheeler and Byfuglien;
– Shots were 14-8 for Dallas after 20.

2nd:
– Early in the period a miscue (or two) allowed the Stars to tie up the game;
– A minute later Ben Chiarot scored his second of the season to regain the one goal lead;
– Assists to Armia and Lowry.
– Who else but Stars killer Patrik Laine gets his second of the game (43rd of year) to give Jets a 3-1 lead;
– Assists to Ehlers and Stastny;
– Stars captain Jamie Benn made it a one goal game on the power play;
– Shots were 8-7 for Dallas giving them a 22-15 shot edge after 40.

3rd:
– In the first shift of the period Jacob Trouba was rocked by Jamie Benn with an open ice hit;
– The hit sent Trouba to the room and shortly thereafter team announced he was done for the night;
– Seguin ripped a shot off the crossbar;
– Neither team could really generate much;
– Stars pulled the goalie and captain Blake Wheeler scored to seal the deal at 4-2.
– Jets held a shot edge 9-8 and overall Dallas overall finished 30-24 up.

Coach Maurice:  Does he have an update on Trouba?  On his concern seeing Trouba trying to get off the ice.  On where Benn hit Trouba.  How the Jets handled the Stars push.  On Lowry getting physical.  On Tanev’s shot blocking in the game.  On zone time/slot shots and how he felt like they did.  Does he take these metrics into account with the penalty kill?  On Laine’s 14 goals against Dallas, is there any reason for that?  During this streak what has he thought of Laine’s game and can he still surprise his coach?