A look at the game 65 lineups. 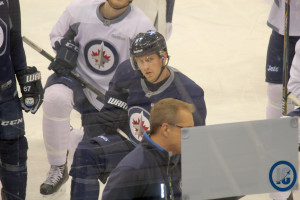 The Jets were on the ice at the MTS Centre in advance of the game against the Senators and according to Ken Wiebe of the Winnipeg Sun these are the projected lines :

The Senators played, and lost in a shootout, to the Wild last night so they aren’t expected to skate this morning.  The Ottawa lines based on what the team sent out as follows:

Brent Wallace of TSN now confirms that Hammond is getting the start for Ottawa.  Initially we had a report that Anderson would be starting but according to Wallace he isn’t fully comfortable with his hand injury.