A look at the game 65 projected lineup along with pre-game audio. 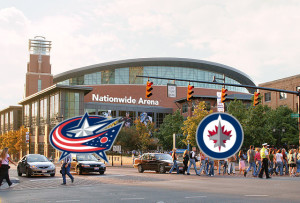 The Jets are in Columbus to begin a four-game road trip out east.  They will be a man down for the first couple of games as the NHL announced on Saturday that Adam Lowry would be suspended for two-games after his high-sticking infraction on Friday night.  It is likely that Par Lindholm, who played 61 games for the Leafs before being traded to the Jets, will draw into the lineup for Lowry.  Another lineup question surrounds the health of goalie Connor Hellebuyck who missed the last game due to illness.

Will Bryan Little go back to centre?  We shall see soon.

As per Ken Wiebe of the Winnipeg Sun it looks like Connor Hellebuyck is feeling better as he is on the ice for AM skate and going through the paces he usually does when starting in net (UPDATED from pre-game warm up skate).  Ken also indicates that Dustin Byfuglien (not in equipment) is on the trip but watching skate from the bench.  As per Mike McIntyre of the Winnipeg Free Press there were no line rushes this AM and while coach Maurice confirmed that Par Lindholm will make his Jets debut at centre he wouldn’t confirm which linemates he will be playing with.

? Par Lindholm on his excitement heading into his debut in a #NHLJets jersey.#GoJetsGo | #WPGvsCBJ pic.twitter.com/NWfJ5snmXc

? Ben Chiarot gives his thoughts on the #NHLJets defensive depth, his pairing with Sami Niku, and facing the Blue Jackets.#GoJetsGo | #WPGvsCBJ pic.twitter.com/UVAAJrAkqa

? Kevin Hayes on the four-game road trip starting tonight and what the #NHLJets want to build on from the win over Nashville. #GoJetsGo | #WPGvsCBJ pic.twitter.com/nzAQ4g63m6

? Jack Roslovic on facing his hometown team and what he expects from the Blue Jackets tonight.#GoJetsGo | #WPGvsCBJ pic.twitter.com/TacxFq3qBU

? Paul Maurice on Lindholm’s #NHLJets debut and the changes to the Blue Jackets roster since the trade deadline.#GoJetsGo | #WPGvsCBJ pic.twitter.com/h4Ktdiq1Px

Coach Maurice scrum topics: Status of Connor Hellebuyck? Where does Par Lindholm fit in? 3rd or 4th line for Lindholm? Could he fit in Lowry’s spot? What would he like to talk about? What is he expecting from Lindholm’s game?  Will he slide into a penalty kill role?  Thoughts on the two-game suspension to Lowry?  How different does Columbus look since Trade Deadline?  Status of Byfuglien?  Update on Morrow?

Coach Maurice was asked about Dustin Byfuglien and the plan ” Start skating toward the end of the week and build from there.”  He was also asked about Joe Morrow “He’s skating now.  He was on the ice yesterday for the first time so he’ll just lightly start skating.  It’s fair to say that he and Dustin are almost on a fairly similar timeline here.  They’ll start skating slowly here toward the end of the week and we feel by next week we should start being able to push them.”

Puck drop is at 6 pm CT.  Be sure to head over to illegalcurve.com following the game for a recap of the action which includes post-game audio from the Jets room as well as from coach Maurice.