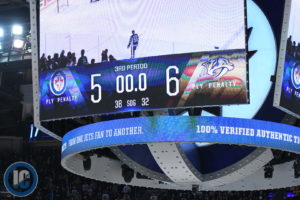 The Jets are now 37-17-9 with the shocking 6-5 regulation loss to the Predators.

1st:
– It wasn’t a high scoring period as neither side could solve the opposition netminder but lots of shots/chances;
– Preds out shot the Jets 13-11.

2nd:
– Matt Hendricks scored his fifth of the year on a nice pass by Joel Armia to open the scoring early in 2nd;
– Assists went to Armia and Copp.
– At just about the midway point the Preds evened it up when Smith put home a rebound to make it 1-1;
– Mark Scheifele scored his 20th of the season on a slick pass by Jack Roslovic to give the Jets a 2-1 lead;
– Assists went to Roslovic and Connor;
– Shortly thereafter Mark Scheifele scored his second of the game (21st of season) on PP to make it 3-1;
– Assists to Paul Stastny (his first as a Jet) and Blake Wheeler;
– Preds tied it up with two goals in two minutes;
– Nikolaj Ehlers took a puck and went into the Preds 1 on 1 and somehow beat Rinne to make it 4-3;
– Assists to Laine and Chiarot;
– Shots were 13-10 for the Jets in the middle frame.

3rd:
– Paul Stastny scored his first for the Jets on a nifty give and go with Ehlers to make it 5-3;
– Assists to Ehlers and Laine;
– Preds scored twice in next four minutes to tie it up 5-5;
– Preds newest player Ryan Hartman scored his first goal for the Preds with 1 minute left to make it 6-5.
– Preds captain Roman Rosi had the primary assist on Hartman’s goal which gave him five assists in the game;
– Jets came close but they couldn’t tie it up and lose to their division rival.
– Jets put up 15 shots to the Preds 9 in the final frame and the game finished 39-32 in favour of Winnipeg.