Recapping the sixth Moose game of the season.

The Moose again took on the Lake Erie Monsters in a rematch of Thursday’s night game, (which the Moose lost 3-1). While they played a better game overall, they were unable to get the result they wanted, losing 2-0, and falling to 0-4-2 on the season. 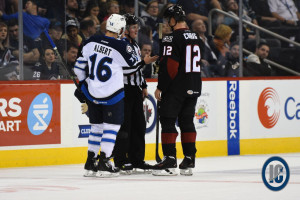 Eric Comrie got the start for the Moose – his 2nd start of the season – and he was busy to start the game. The Moose were completely outclassed to start the game, with the Monsters hitting 2 posts in the first 6 minutes, and out-shooting the Moose 7-0. Just over 8 minutes in, former Canadian World Junior defenceman, Dillon Heatherington, let go a simple wrist shot from the point, which was deflected nicely by Monsters’ captain, Ryan Craig. 1-0 Monsters. For nearly the first 15 minutes of the period, the Moose were unable to exit their zone or create any scoring chances in the first period. The Monsters looked faster and more organized in all aspects of the game. Then towards the end of the 1st, they started to get things going – the first good Moose chance came from the skill of Joel Armia, who made a nice move and fed the puck to MacWilliam in the slot (who just missed, high glove). Minutes later, J.C Lipon made a very similar pass in the slot to Matt Halischuk, who half-fanned on the one-timer. Then, on the powerplay, Josh Morrissey took advantage of the transition as the Monsters were changing and walked through the middle of the ice, dangling the defender and feeding an open teammate to his right who wasn’t able to bury past the Monsters’ goaltender, Korpisalo. After 1, the Monsters were ahead in shots, 13-12, and in scoring chances – roughly 8-4.

The 2nd period was quiet to start, until J.C Lipon took it upon himself to fight Oleg Yevenko. You remember David & Goliath? This wasn’t exactly like that, but with Lipon standing 6′, 180, and Yevenko at 6’7, 230, it was pretty remarkable that the former managed to hold his own. The biggest moment of the period came from Eric Comrie, who made a huge save while the Moose were on the PP – one which would have put the Moose down 2-0, and sapped their momentum. Kosmachuk and Halischuk both had good chances in the period, but neither was able to bury. Shots for the period were only 7-4, in favour of the Moose, with neither side registering more than a couple of good scoring chances.

The 3rd period started badly for  the Moose, with the Monsters scoring on a nice cross-crease feed by 2014 Columbus 1st round pick, Sonny Milano, which was tapped in by Michael Chaput. (The same player who scored the game winner on Thursday). Moose d-man Julian Melchiori made a very nice play while short-handed, stripping a Monster in the neutral zone, which led to a partial break and a pretty good chance.With 12:38 left, the Moose got a break on a marginal interference call, sending them to the powerplay. They got 3 or 4 really good chances – including one where Ryan Olsen seemed to have the top half of the net open and chose to wrap it around instead – but weren’t able to capitalize. Julian Melchiori made another nice play, with a big hit behind the net on Sonny Milano. Unfortunately, the rest of the period was anti-climactic, with the Monsters getting the best chances – including another post with about 4 minutes left.

The bottom-line in tonight’s game – and in many of their games this season – the Moose haven’t been able to match the speed, or the skill of their opponent. The Monsters beat them to loose pucks all game long, put stress on the Moose defence with their forecheck, and created turnovers. By contrast, the Moose weren’t able to apply consistent pressure to the Monsters’ D, whether on the forecheck, or off the rush. A further area of concern for the Moose was their passing – aside from a few of the more highly skilled players like Morrissey, Armia, Kichton, and de Leo, this team is having tremendous issues with puck movement. This affects them everywhere from exiting their own zone, entering the opposition end with control, and moving the puck around once they do get in. This team is crying out for players like Nic Petan, but at this point, it looks like he’ll be sticking with the Jets for the season.

1-Joel Armia – For the second game in a row, Armia was the only really dangerous player on the ice for the Moose. He has the ability to create plays with his size, vision, and stickhandling, as well as the ability to finish them. He was the only one helping turn the tide for the Moose in the early going tonight. He also asserted himself physically on a few occasions.

2-Josh Morrissey – A fairly mistake-free game, along with a highlight reel-quality play had his teammate been able to bury. His vision and passing ability are very noticeable.

3-Eric Comrie – A pretty solid game tonight from the goalie, who was beaten only by a deflection and a great cross-crease pass. The short-handed save he made in the second help keep his team in the game.

The Moose play their next game on the road in Milwaukee (Thursday), against Nashville’s farm team, the Admirals.

For other Moose news and updates, follow me @peteciamandias