Recapping the fifth Moose game of the season. 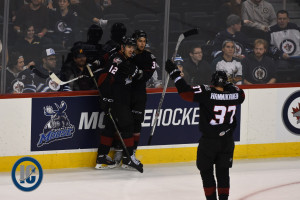 In their 5th game of the season, the Moose took on the Lake Erie Monsters in what amounts to the AHL’s version of Winnipeg vs. Columbus. After scoring first, the Moose gave up two goals in the second period, and an empty netter in the 3rd, losing 3-1 in front of a home crowd of nearly 5,000 at the MTS Centre.

The play was uneventful at the start, without any prime scoring chances. That changed about 8 minutes in, when on the power play, Joel Armia walked into the high slot and ripped a wrist shot off the bar to give the Moose a 1-0 lead. The tandem of John Albert and J.C Lipon continued their strong play this season, creating a few high quality scoring, but they were unable to bury. The first period ended with the Moose up 1-0.

The Moose were outshot 10-0 to start the 2nd period. With 6 minutes left in the period, Lukas Sedlak came in and took a non-descript wrist shot from the high slot; unfortunately, the puck careened off Chase de Leo’s shin pad and beat a surprised Connor Hellebuyck. Then, just over a minute later, after a couple of Moose defenders were outworked behind the net, the puck came out front to a wide open Michael Chaput, who buried it over a sprawled Hellebuyck to make it 2-1 Monsters. The Moose had a bit of a push-back, creating a few chances in the last few minutes, but the period ended with the Moose down by 1.

The Moose maintained good pressure in the Lake Erie zone to start the 3rd, but weren’t able to capitalize on several good chances. Joel Armia walked around two Monsters with the same slick toe-drag move, nearly tying the game. 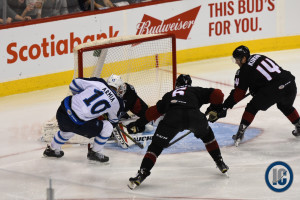 Later, Julian Melchiori walked into the slot but passed to a right-handed teammate who was forced to pull it to his backhand (a leftie would have had a fantastic chance). With 10 minutes left to play, the Moose were still down 1-0. Try as they might, the Moose weren’t able to generate a lot of offence late in the game, and with the goalie pulled, the Monsters ended the game with an empty netter.

– After being outshot 45-20 on Saturday against Ontario, the Moose were again outshot by a two-to-one margin, with the final tally at 36-18.

– Jay Harrison did not dress for the Moose after being injured in last Saturday’s game against Ontario; as a result, the Moose played with 7 defencemen and 11 forwards, and Winnipegger Peter Stoykewych made his season debut.

– Thomas Raffl did not dress after being injured in the first game of the season in Toronto. He hasn’t skated since the injury; at this point, his status is week-to-week

1-Joel Armia – He got the team off to a much-needed good start with that tremendous shot – a play that few others could make. He also made two beautiful dangles on the same play in the 3rd, and nearly tied the game. At times, he looked like he didn’t belong in the AHL.

2-Connor Hellebuyck – always square to the puck and calm in the net, Hellebuyck seems to make all the saves you expect of him, as well as several that you don’t. With an erratic bounce on the first goal, and very poor coverage on the second, you can’t pin either goal tonight on him.

3-John Albert – the Moose captain is a now in his 5th professional season, and has become an extremely solid pro – smart, fast, defensively conscious, and dangerous in scoring areas, he’s held back only by his stature (5’11), as most teams want a bit more size out of a player whose NHL role would be that of a 4th line centre. He plays the same “200-foot” game every night, and is the steadiest skater on this roster.

The Moose end this 4-game home-stand on Saturday night, again versus Lake Erie. With their record now at 0-3-2, they’re looking desperately to get in the win column.