Post-game from the Jets dressing rooms as well as from Coach Maurice. 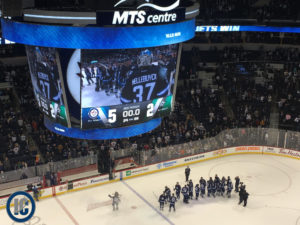 Patrik Laine loves hat tricks (this was his third of the year) and loves playing the Dallas Stars (eight goals and four assists for 12 points in five games).  Nice overall game from #29 who scored goals 24, 25 and 26 on the season.  This gives him 47 points (26 goals and 21 assists) in 51 games which is good enough for second overall in rookie scoring, one point back of Mitch Marner of the Maple Leafs (who has played four more games).  He remains one goal back of Auston Matthews for the rookie goal scoring lead as the Toronto rookie had two tonight for the Leafs.  He sits in third spot one point back of Laine.

Guess Patrik Laine wasn’t done. His third goal of the night (26th of season) and third hat trick of the season and here come the hats. pic.twitter.com/F0Zn2TWn5y

Interestingly, Laine has five game winning goals this season which ties him with Sidney Crosby and Nathan MacKinnon for most game winners as an 18 year old.  Laine doesn’t turn 19 until April 19th so he will have a number of opportunities to break the record.

Not to be lost in the Laine pandemonium (although he is the first rookie since Teemu Selanne/Eric Lindros in 1992/93 to have three hat tricks in one season) is the fact that with three assists Mark Scheifele is in seventh spot overall in the NHL scoring race.  He also broke the 200 points plateau in his NHL career this evening.

Coach Maurice:  On Laine’s second goal.  How did he feel about the rest of the team?  What is Laine doing right on being able to get to the right spots on the ice?  How far ahead is Laine of the expectations he had at the beginning of the season?  Did he like the shots they limited Dallas to?