A look at the game 58 projected lineups and pre-game audio. 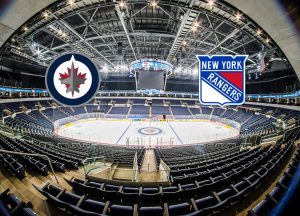 This should be an interesting game tonight as Jacob Trouba and Brendan Lemieux return to Winnipeg for the first time since they were traded (separately) last year to the New York Rangers.  The Blueshirts are 6-4-0 in their last 10 games, including a 4-1 win over the LA Kings on Sunday. The Jets are 4-0-1 in their last five games.

The Jets were off on Monday following back-to-back wins over the Ottawa Senators and Chicago Blackhawks.  For now the projected lineup is simply based on last game.

According to Mitchell Clinton of Jets TV about an hour before morning skate Adam Lowry, Mathieu Perreault and Carl Dahlstrom skated.

Mitch also adds that Tucker Poolman and Luca Sbisa are participating in regular jerseys.  As well no Mark Scheifele skating this morning.

Neal Pionk on facing his old squad, did he catch up with any of them last night, what the Jets have done well of late and what they expect tnt from the NYR.

Kyle Connor on being the 2nd Star of the Week, has he noticed anything different in his game of late, what has the PK doing well recently, aspects of his game he works on, thoughts on the Rangers.

Coach Maurice:  Status of Poolman and Sbisa?  How would he describe Kyle Connor’s game?  What is the next step for Kyle Connor?  What has he liked about Kyle Connor on the PK?  How different do the Rangers look after the first game of the season?  What stood out about Jacob Trouba during his time as his coach?  On the metrics saying Kyle Connor defensively isn’t that strong, what would he say about that?