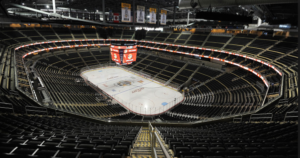 An impressive victory by the Jets as they overcame their depleted defense, a goal by Sidney Crosby under a minute into the game to register a 4-1 victory in Pittsburgh, the first since 2006 when they were the Thrashers. Jets finish the opening four game road trip 2-2-0.

They get goals from Heinola, Ehlers, Poolman and Pionk. Three assists each for Scheifele and Laine. 37 saves for Connor Hellebuyck. A well-rounded effort to send the team home with a victory ahead of Thursday’s home opener.

Coach Maurice:  On how the Jets handled the Penguins scoring on their first shot of the game.  On three goals coming from the defence.  What does a night like this mean for Hellebuyck?  Can he remember his last win in this city?  On Ville Heinola scoring his first goal.  How does 2-2 sound for the opening road trip?  On Patrik Laine being good despite missing training camp.  On the forward tracking back.  Losing a goal on an offside challenge.  On the shuffling of the D pairs.  Does Josh Morrissey have a concussion?

With Josh Morrissey being held out of the game for precautionary reasons coach Maurice was asked after the game if it was due to a concussion.  “No.  He has not been diagnosed with a concussion.  Correct.”

The Jets are off on Wednesday but will be back on the ice on Thursday as they prepare to kick off the home portion of the season with a game against the Wild.