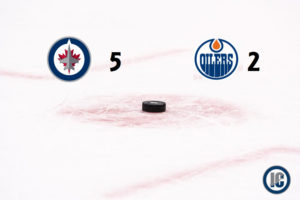 The Oilers came out firing to start the game but the Jets were able to weather the storm thanks to the play of Connor Hellebuyck who was the difference.  Edmonton had out shot Winnipeg 7-0 early on but slowly the Jets started to gain back some momentum.  Mark Scheifele picked up his third goal in three games for Winnipeg to open the scoring with Dmitry Kulikov picking up his first point as a member of the Jets.  Then Kulikov picked up his first goal on a nice pass by Nikolaj Ehlers who held the puck and then found Kulikov in the slot.

But as Jets fans have become all too used to early this season the Jets looked like they may crumble as the Oilers got two goals in 40 seconds from Draisaital and Nugent-Hopkins to tie the game in the 2nd.  However the dam didn’t break entirely and Nikolaj Ehlers scored two straight (and almost a third to close the 2nd) to give the Jets another two goal lead.  In fact the Jets out shot the Oilers 19-7 in the middle frame.

Nikolaj Ehlers picked up the natural hat trick (second of his career) on a late power play opportunity and the Jets held on for their first win of the season.  It was the first natural hat trick of the eight hat tricks we’ve seen by the Jets 2.0

Connor Hellebuyck was big for the Jets and if not for his strong play in the 1st period that game could have looked very different.  In total the Jets goalie stopped 37 of the 39 shots he faced from the Oilers.  Blake Wheeler was playing in his 700th career NHL game.

Coach Maurice provided an update on Dustin Byfuglien saying the team tried to “He came in at the morning skate we tried to loosen it up and it didn’t quite warm up….We do a bunch of things to these injuries.  If he doesn’t feel right we didn’t put him on the ice.  It’s day-to-day, lower body.”.