Post-game from the Jets and Devils dressing room as well as from Coach Maurice. 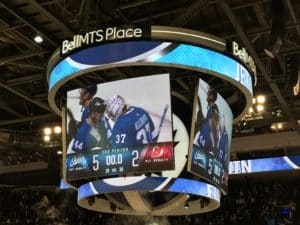 – The Devils pressured early but Jack Roslovic opened the scoring;
– Mark Scheifele scored his eighth from (who else) Blake Wheeler to quickly make it 2-0;
– Devils held shot lead 13-11 after 20 minutes.
– Mark Scheifele got his second of the game (and team leading ninth of the season) to make it 3-1
– Dustin Byfuglien laid out Brian Boyle with a massive hit in the 2nd period;
– Nikolaj Ehlers fired home his fourth of the season to make it 4-2;
– Followed up by Mathieu Perreault finishing off a nice Kyle Connor pass to make it 5-2.
– Devils held shot lead 12-10 after middle frame for a 25-21 edge after 40.
– Final frame was predictably slow (4th line got some time which was good).

Coach Maurice:  Thoughts on his top line.  On the Jets 2nd period.  Getting the 4th line into double digits in minutes and contributing.  Scoring some goals last few games.  Thoughts on the Byfuglien hit on Boyle.  Did they change the penalty to Byfuglien?  What can he say about Kyle Connor’s game?  What Connor has been able to do away from the top line.  More on the Byfuglien hit.

Mark Scheifele on Blake Wheeler’s 500 points with Jets since relocation: “He’s amazing. I say it everyday. I’m lucky to play with him.  He’s a fantastic player and he’s a great friend.  What makes him stand out is just how hard he works. Good things happen to guy’s who work hard and I’m definitely very lucky to play with him.”

Jets have the day off on Monday.