Recapping the 14th Moose game of the season. 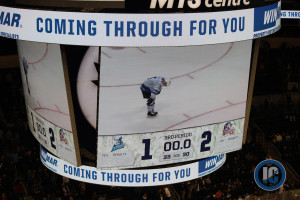 In their first meeting of the season, the Moose took on the Bakersfield Condors – farm club of the Edmonton Oilers. Nic Petan played his first game as a Moose, following his re-assignment from the Jets on Thursday.

Just 2:24 in, a Moose giveaway in their own end lead to a Condors goal by Oilers’ prospect Mitch Moroz.

Ten minutes later, Nic Petan dug a puck out of the corner and fed a pinching Brenden Kichton; Kichton confidently walked into the slot and fired a great shot just over the pad and under the glove.

With the Condors on the powerplay, Brad Hunt appeared to score on a great shot, blocker high, but the Moose caught a break as contact with Connor Hellebuyck led to a goaltender interference penalty, and no goal.

Joel Armia created a whole whack of chances in the second period – none more so than the 2-on-1 where he fed J.C Lipon – unfortunately Lipon dumped it in the bread basket of Laurent Brossoit – who was excellent in goal tonight for Bakersfield.

In the late second, Brenden Kichton jumped into the play again and made a fantastic toe drag in the slot. He was left one-on-one with Brossoit, but was unable to beat him. The second period ended with the score tied at 1.

The difference in the game came on a harmless looking point shot from Condors d-man Brad Hunt – former high-scoring QMJHL’er Alexis Loiseau made a great tip on the shot – which was initially going wide – and gave the Condors a 2-1 lead midway through the 3rd.

With the Moose really pressing in the last five minutes, Scott Kosmachuk took a costly clashing penalty with just 2:40 left, putting the Moose on the pk and stalling their momentum and opportunities.

Brenden Kichton – Not only did he snipe to tie the game early, but he also made another wonderful play which nearly put the Moose up by one. With 9 points in 14 games, he continues to lead the Moose in scoring, and now sits 17th in the AHL among all d-men. He was dynamic out there tonight, as he has been most of the season.

Joel Armia – He was incredibly dangerous again tonight, especially off the rush. Because of his skill and his reach, he inevitably draws defenders to him, and creates space for his linemates. J.C Lipon had 6 shots on goal including a few prime chances, primarily from great plays by Armia. When he’s “playing his game”, he’s almost unstoppable.


Nic Petan – He assisted on the only Moose goal, and looked quick, patient, and more confident than he had in the later stages of his NHL stint. He played tonight with Austen Brassard and recent Moose revelation, Jiri Fronk, and the line was working pretty well. Expect the Moose powerplay to pick up as he works the right half-wall. (Same spot as Perreault with the Jets).

Forward Thomas Raffl is nearing a return to action; he might play Sunday