Remis takes a look at the remaining 15 games and gives mathematic projections for the Jets,

On the Illegal Curve Hockey Show a few weeks back, we did a segment called “Win, Lose, Toss Up” where we went through each of the Jets remaining games and gave our prediction on the outcome. We then tallied the points up to see if it would put the Jets in a playoff spot. While I’m not going to go through each game individually, I’ll try to project the points earned in the remaining fifteen games based on past performance. 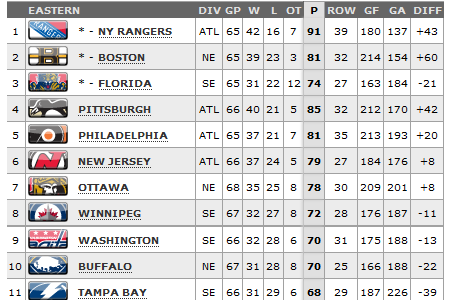 Winnipeg currently has 72 points in the standings, if they want to finish with 93 points, they’ll need to earn 21 points in their final fifteen games finishing at either 10-4-1 or 9-3-3, that is a winning percentage of 66.7% or 60%, and a points earned per game of 1.4. That is greater than the team ‘s winning percentage this season of 47.8% and average points-per-game on the season of 1.07.

From a strictly mathematical point of view, if we take their average points-per-game (1.07), and multiply it by the number of games remaining (15), they should earn 16.05 points. Well short of the 21 hypothetically required.

Unfortunately for Jets fans, nine of the remaining fifteen games are on the road. If we take their points per game at home and the road, and multiply it by the respective games (1.31 x 6)+(0.81 x 9) the Jets will finish with 15.15 points, short of the  21 required.

What is clear from the math is the Jets are going to have to play beyond the level they have throughout the season to make the playoffs.  While this is not necessarily unheard of in professional sports, teams get “hot” at the end of the season and make a run to ear a playoff birth.

The good news for Jets fans is that they could be one of those teams that gets “hot”.

Comparing the post All Star break and total season records, the Jets are playing their best hockey right when it counts most—down the stretch. From projecting their point total based on post All-Star break performance we can project that they will earn ((9 x 1.14) + (6 x 1.4)) 18.66 points in the remaining 15 games, arriving at a total of 90.66 points.

As Lloyd Christmas once said, “so you’re saying there is a chance.”