We conclude our look at Pavelec’s value by examining a number of factors such as demand for goalies, negotiating ploy, options and projecting his contract.

We take a look at the remaining factors for analyzing Pavelec’s worth to this team.

Now that supply has been set out above, let’s examine demand.  In other words, how many free agent goalies will be available to sign without giving up any compensation, aside from money (age in parenthesis)?

A few of the above netminders likely won’t be relied on to start in the NHL but a couple of them may step in to log significant minutes in some team’s crease.  Never mind the fact that we have not yet taken into account quality backup netminders on certain teams like Vancouver (Schneider) and Los Angeles (Bernier).  Simply put, there is hardly a market for netminders in the NHL.

This, of course, works in Kevin Cheveldayoff’s favour.  Think about it; there is more supply than demand for netminders in the NHL.

The question then becomes, what is Ondrej Pavelec’s negotiating ploy? 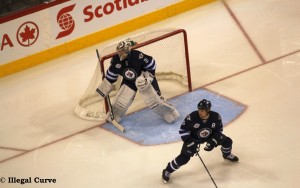 He has the following options:

However, the options of demanding a trade or receiving an offer sheet are virtually remote, as the market is saturated with goaltending talent.  Also, the option of holding out is extremely rare because the player very possibly will never recoup the lost salary, never mind the risk that another netminder begins to perform and the need for the player decreases thereby hurting his market value and leverage. In essence, Pavelec’s leverage centers on arbitration.

Arbitration is an experience that both player and team generally hope to avoid, as it sometimes results in hurt feelings.  Former Devils center Bobby Holik documented just that on the Illegal Curve Hockey Show a few weeks ago.

In reality, it is in both the team and player’s interests to come to an agreement prior to an arbitration hearing.   Of course, that requires reasonable positions on both sides, which, for the purposes of this article, is an assumption we are going to rely on.

It is extremely interesting that three of the above netminders are also closing in on restricted free agent status.  Not surprisingly, these are the three netminders that were drafted in the same entry class as Pavelec.  Fascinatingly, all of Price, Rask and Pavelec signed two-year contacts after the expiration of their respective entry-level contracts.

Here were their second contracts:

Halak signed a four-year deal that takes him to UFA status, but this was the Slovak netminder’s third NHL contract.  With Pavelec also looking for a third NHL contract, similarities can be drawn from their respective situations.

What had Jaroslav Halak accomplished prior to his third NHL contract?

Halak had obviously played less games than Pavelec heading into his third NHL contract, however, he also had a longer track record in professional hockey (69 games in AHL with Hamilton, never posting save percentage below .927), started for Slovakia in the Olympics and led the Habs on an incredible run to the Conference Finals after upsetting both the Penguins and Capitals in the first two rounds).

Considering Pavelec’s statistics do not really compare favourably to any of the goaltenders listed above (aside from Semyon Varlamov), his agent (Allan Walsh) has a more challenging argument on his hands.

In any contract negotiation, there are many options available for both sides.  Both the team and player will likely entertain the possibility of both short-term and long-term possibilities.

Pavelec only has two seasons after this season until he becomes a UFA.  This provides both Kevin Cheveldayoff and Allan Walsh with options with respect to term.

Players and teams generally do not opt for one-year contracts for young up-and-coming players.  Take for example the two-year contracts signed by Blake Wheeler and Zach Bogosian this off-season.  Two-year deals were determined to be a sensible middle ground for both player and team.  One-year deals, on the other hand, provide salary cap uncertainty for the team and pressure on the player to perform at exceptional levels to increase his value (something that can work both for the player and against the player depending on his makeup).

It is also important to point out that some teams may prefer a longer term deal, if it really believes the player is worth that type of term, because they can structure a deal in such a way as to keep the cap hit consistent from year-to-year.  For example, if the team signs Pavelec to a two-year contract for $5.0 million, the resulting cap hit would be $2.5 million per season.  If after the two-year contract expires, the team subsequently signs him to a three-year deal worth $15.0 million, the resulting cap hit for the subsequent contract would be $5.0 million per season.  Alternatively, if the team signed the player to a five-year deal for $20 million at the outset, the player would receive the same amount of money over the five year term ($20 million) but the team could lock in a cap hit of $4.0 million.  Obviously there is risk inherent in a long-term deal for the team, but some teams may prefer one option to the other.

Andrew Ladd signed a five-year contract with the Jets in the summer of 2011, so let’s assume for the purposes of this article that the team will not hand out a contract of greater length than that of the proverbial face of the franchise (there is also the issue/uncertainty of a new CBA this off-season, but that did not seem to deter the Jets from committing to Ladd long-term).  As a result, let’s work within the framework of a one-year contract through to a five-year contract for Pavelec.

Before moving further, we should also mention the highest paid NHL netminder, in terms of cap hit, is Henrik Lundqvist at $6.875 million.  Only four goalies in the NHL have a cap hit of $6.0 million and higher (Ryan Miller, Niklas Backtrom and Cam Ward.  Moreover, only seven goalies in the NHL make upwards of a $5.0 million cap hit per season.

The ceiling for Pavelec on any contract is likely $5.0 million.  Here are some interesting averages for the goaltenders that carry a $5.0 million cap hit and above this season:

Not one of the eleven netminders who carry a cap hit of $5.0 million and above have a career save percentage lower than Ondrej Pavelec’s.  That is not to say Pavelec won’t eventually reach their production levels, but the goaltenders getting paid are generally older and more seasoned—and, of course, UFA eligible. As mentioned in the Evander Kane piece, UFA years have the most value to a player because the player no longer is “restricted” from signing wherever he may choose.  A player’s UFA years are his most valuable financially and provide the player with the highest form of leverage—playing one team off against another for his services.

That digression aside, using $5.0 million as a ceiling for Pavelec’s value, then what is the floor?  Pavelec is unquestionably going to be tendered a qualifying offer this off-season, but his contract for 2012-13 will not be in and around $1.15 million.

As a starting point, let’s average the cap hits of Jonathan Quick for next season ($1.8 million) and the contract of Semyon Varlamov for next season ($2.83 million).  This total of $2.3 million seems like a reasonable starting point for Pavelec.  Quick is probably better than his contract, Varlamov is probably worse.  Pavelec probably finds himself somewhere in the middle, so a reasonable $2.3 million starting salary for his second last RFA year seems sensible.

Moving forward, using Jaroslav Halak as a barometer may fit quite well.  Halak has superior numbers but has also not logged over 45 games in a season on two occasions.  Moreover, the average annual salary continues to increase annually, so contracts signed two years later generally take that into account.  We would also be remiss if we did not point out that Halak has played in more goaltender friendly systems (Montreal and St. Louis for defensive coaches in Jacques Martin and Ken Hitchcock).  Just ask Miikka Kiprusoff how defensive coaches change your statistical output—specifically, his years playing under the offensively oriented Mike Keenan (.906 and .903 save percentages in those two seasons).

With that in mind, and with countless factors taken into account, let’s attempt to project Pavelec’s earning capacity moving forward:

Needless to say, the Jets will have an interesting off-season with Evander Kane and Ondrej Pavelec up for free agency.  Of most interest to some is the compensation these players garner from the Jets brass; however, we may learn more about the future of the franchise by observing the course of action GM Kevin Cheveldayoff takes in handling these negotiations.

**Thanks to capgeek.com for all of the contract data**