Drama in the Desert Weekend Report: Rumors spreading about bonds, Hulsizer sweetens the pot and more

Bond Rumor:  Chatter has spread like wildfire online all weekend that there has been some movement regarding the bonds(that same have been sold or taken off market) that would save the Coyotes. 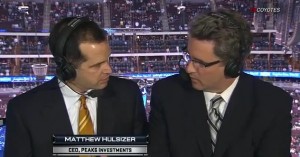 Arizona Republic:  Phoenix Coyotes rising above the madness. Interesting to hear what the other teams in Arizona are saying about the Yotes.

Vancouver Sun:  Coyotes a hot act in a bad circus.  Despite all the negative press the Coyotes on ice performance continues to impress.