TSN: Jets meters doubles. Folks in Winnipeg were down when the ticker hit 10 yesterday but it has rebounded nicely today to 15 on the news from Goldwater.  Does this not feel like the stock market?  Is there a way to day trade on Coyotes news?

Arizona Republic:  Come down from Mount Olympus.  At what point do you realize that the patient is dead?

TSN:  Goldwater still opposed to Hulsizer deal for Coyotes.  Time to play the Tom Petty song, I won’t back down, because Goldwater isn’t going away.

Montreal Gazette:  Revised Coyotes deal still violates law.  However as can be seen from TSN’s ‘Hockey Insider’ Darren Dreger’s tweet below, that might not matter to the NHL.

TSN:  Darren Dreger gives us this.

Winnipeg Free Press:  Hulsizer letter doesn’t change Goldwater’s stance.  Have you seen the actual letter that he sent to Goldwater?  Doesn’t exactly instill confidence in him.

Globe & Mail:  Goldwater steadfast in vow to block sale of Coyotes.  Shoalts lays out the particulars. 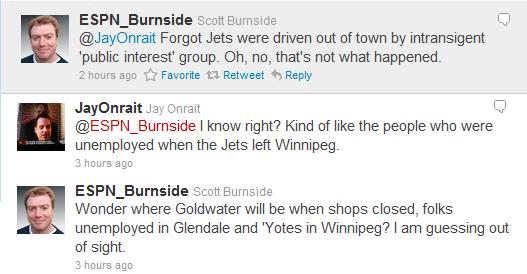