Versus:  After further review.  Dater backs down after he ripped Coyotes fans last week.  He continues to make the valid point that;

There is just something bothersome, in a kind of primal way, when something isn’t properly appreciated. It’s why your parents chided you as a kid – There are kids starving out there, and you’re turning up your nose at that piece of steak???Coyotes fans have a great big piece of filet mignon in front of them right now, and too many Arizonans have pushed the plate away.

Fox 10 Phoenix:  Coyotes leaving?  Goldwater CEO Darcy Olsen lays out their position in this series of 4 video’s as speaks about the situation in Phoenix.  Senator McCain’s comment (video 4), if accurate, is brilliant;

Darcy Olsen:  “I told Senator McCain that you fight against pork like this everyday in Washington and this is clearly pork, how can you support this?”

Interviewer:  “What did Senator McCain say?” 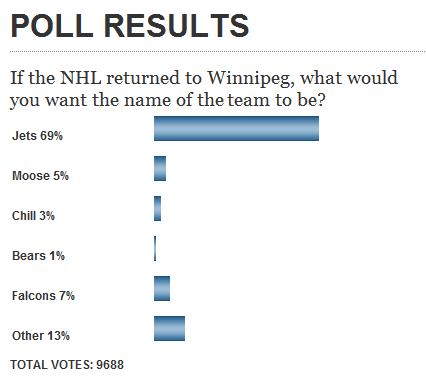 The best way to stay tuned to all the Drama in the Desert is by doing any/all of the following;

3.  Or subscribing to Illegalcurve RSS’s feeds.