Drama in the Desert: Honey we’re moving to Winnipeg, Glendale residents speak out and more.

ESPN:  Bonds moving forward.  Well this would be the other shoe dropping.  First Goldwater drew it’s line in the sand, and here comes the COG with theirs. 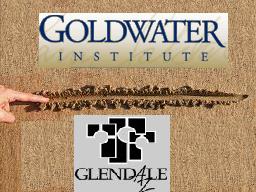 Toronto Sun:  No Plan B to keep Coyotes in Glendale.  With all due respect, wouldn’t the present plan qualify more aptly as Plan Z?

Winnipeg Free Press:  Goldwater Institute places onus on opponents.  As well they should.  If the COG truly felt the law was on its side, why not move forward?

Phoenix Business Journal:  Coyotes deal could be delayed until end of season.  Could be a similar situation to what happened with the Nordiques.  After Quebec lost to the Rangers in the 1st round of the 1994-95 playoffs, it was announced in May that they were moving to Denver.  Of course people in QC are wanting to get back into the business of NHL hockey and many have set their sights on the Atlanta Thrashers.

TSN:  Jets Meter Rises.  The Jets meter on TSN has climbed to a 12.  Time to party?  Not just yet.  While not as exciting as when it doubled from 5 to 10 on March 14th, any increase is good if you’re a fan of the NHL returning to Winnipeg.

East Valley Tribune:  Glendale residents speak in support of Coyotes deal. Mayor Scruggs lays it out to the 70 plus residents that were granted access to last night’s town hall when she said “If the bonds do not sell the team is gone.”

Globe & Mail:  Honey we’re moving to Winnipeg.  Who is ready to hear this?


Calgary Herald:  Winning helps Coyotes ignore team’s sale drama.  I can understand Shane Doan’s point of view since he’s played with the Coyotes for 15 years, but what is Adrian Aucoin’s deal?  He states “There might be a few guys who pay attention to it, but not me.  It would be too painful.”  Aside from his 7 years with the Canucks, he’s spent no more than 3 years with any team since, including Lightning (1), Islanders (3), Blackhawks (2), Flames (2) and now he’s with Coyotes (2).  I guess when he falls, he falls hard.

Almost two years since trade to Jets, PLD is 'getting to where I want to be'.

Goldwater Institute Announces Lawsuit against City of Glendale
Drama in the Desert: TSN Jets Meter moves again, Glendale might look to AHL as substitute and more