Drama in the Desert & Dixie: NHL retreat from Atlanta far from strategic, CBC’s Friedman suggests Thrashers hurtling towards Manitoba, Whose ready to see a Phoenix/Winnipeg game?

Atlanta Journal Constitution:  Hawks for sale!  Thrashers for sale!  But only one stands to exit.

Miami Herald:  Thrashers-to-Winnipeg story is bad news for Bettman.  Of course while many in Winnipeg are not fond of the Commissioner for what they saw (fair or not) as his lack of effort to save the Jets, perhaps he will be able to bounce back when/if a team returns.  Who am I kidding, the boo birds will rain down the moment he steps foot in the MTS Centre.

XM Radio (audio):  Dale Hawerchuk interview.  How great is #10?  Man crush time.  Great interview to listen to.  I like how pensive he sounds when asked if he might be a future head coach of the Winnipeg Jets.  Considering that his old wing man Paul MacLean is an assistant in Detroit, perhaps it’s time to reunite the 80’s boys in Winnipeg.

Globe and Mail:  Would the new Jets be called the Moose?  Let’s hope not.  With all due respect to True North, there is almost no affinity for the Moose with the majority of people in Winnipeg.  Poll after poll would seem to indicate same.  Of course perhaps this is why there hasn’t been any leaking of a potential team name.    Would you want team to be called Moose?  Sound off in comments.

National Post:  It seems the NHL is only willing to play one shell game at a time.  Still surprised that the COG saved the Yotes.  Perhaps like Councillor Lieberman, they are hoping Balsillie will come back into the game.

Toronto Star:  NHL retreat from Atlanta far from strategic.  Interesting to note that the schedule is released on the 15th according to Cox, not the 22nd as had been previously mentioned.  I don’t know about you but on my imaginary calendar, I already have 1 game scheduled.

Click ‘read more’ for additional news links, blogs, polls and our video/picture/tweet of the day.

National Post:  True North learns from Balsillie’s blunders.  Still have to wonder if the NHL couldn’t have straightened out this Balsillie mess.  Financially he’s clearly the type of owner the NHL needs.

Winnipeg Free Press:  Will Thrashers have more class than Coyotes?  I think Doug Brown’s first mistake is assuming that Phoenix has a PR department on staff.  And as we learned when we interviewed Thrashers goalie Chris Mason on Saturday’s Illegal Curve Radio show (every Saturday from 9am cst to 12pm cst on Sports Radio 1290), some players at least won’t have a problem playing in the Peg’.

National Post:  Still waiting for X-mas in Winnipeg.  Great read by Bruce Arthur.  People in the city have curbed their enthusiasm until an announcement from True North is forthcoming.

CBC: Thrashers’ Rollercoaster Ride Hurtling Toward Winnipeg?. Elliotte Friedman with an optimistic piece here for Winnipeg fans. He sums up the story nicely, the Thrashers will lose $32 million next year, they’d rather fill their arena with concert dates, nobody wants to buy the team and pay the lease because they will lose money. Enter…True North.

Sportsnet:  Teams on the move.  Interesting sentence in the article was this;

……Commissioner Bettman wouldn’t comment on the agreement, but a source told Sportsnet that “Gary has promised Winnipeg a team for this year”.

Bird Watchers Anonymous:  Is this the End of the Thrashers?  Does Gary Bettman have one more rabbit to pull out of his hat.

Behind the Net:  On hockey returning to Winnipeg.  Our guest on the IC Radio show this past Saturday, Gabriel Desjardins isn’t too happy with the Star’s Damien Cox.

The Malik Report:  If things keep rolling the way they are between Atlanta and Winnipeg, stick with Jimmy D.  More talk of division realignment.

TSN:  What should Winnipeg’s team be called?  As we learned from the 500+ votes that were cast, most are still tied to the name, Winnipeg Jets.

CBC:  Where would you like to see an NHL team.  Either people in Winnipeg have a lot of internet access, or across the board, people are feeling the love for the Peg’ as it currently leads the poll. 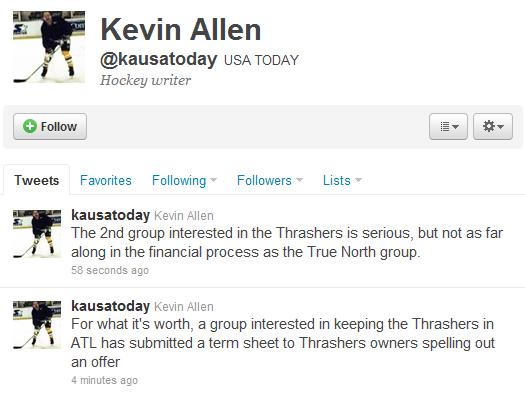