Drama in the Desert & Dixie: Clock ticking in Atlanta, Ominous signs of past in Atlanta, No time for division realignment if Thrashers move.

Calgary Herald:  Plett sees ominous signs of past in Atlanta.  He hits problem on head, playoffs once in eleven years makes it difficult to grow fan base.

Toronto Sun:  Clock ticking on future of Thrashers.  Varying accounts out of Atlanta either have team being saved or nobody interested in saving it.  Who knows what anymore.

Columbus Dispatch:  Jackets’ hopes rise in East.  Doesn’t sound like anyone will be making move next season.

Albany Herald:  Whispers everywhere that Thrashers leaving for Winnipeg.  Key word; everywhere.  Everybody and their dog knows something.

CBC(video at 5:50): Hotstove.  Eric Francis says that the window for the team to be moved is within the next 3 weeks, and that it “could” happen within that time frame. Interesting to note, he also says that if Atlanta were to be moved to Winnipeg for next season the NHL Board of Governors doesn’t have time to vote on division re-alignment for next year and they would stay in the East. A vote would then be held for the 2012-13 season. For Illegal Curve’s take on division realignment, see our post here.

The Hockey News:  Stephen Bronfman has no interest in being owner of NHL team in Quebec.  Looks like the Habs vs. Nords divide remains in effect.  Can we expect sales of Crown Royal to decrease in Quebec City as result.

SB Nation Atlanta:  NHL division realignment least of Thrashers worries.  We’ve talked realignment in the past but as the writer suggests, it can be discussed more fully when/if the team moves. 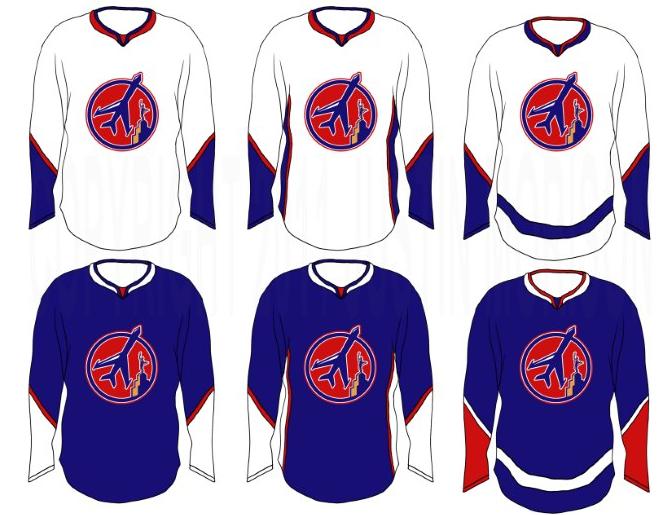 IC Reader Justin provided us with some of his ideas for a potential new jersey.