What can you say?  The Stars’ 2008/09 was an unmitigated disaster.  After taking the Detroit Red Wings to six games in the Western Conference Final in 2007/08, the Stars came into last season with expectations of a Stanley Cup run.  Well, let’s just say that did not exactly happen.  In fact, the opposite occurred, as the season was a disaster from day one.  The acquisition of Sean Avery back-fired mightily, Marty Turco had a poor season and the team lost Brendan Morrow to injury for the majority of the season.

Looking forward to this season, expectations have been curbed in Texas.  Out is the the GM combination of Brett Hull and Les Jackson, and in is former Stars center Joe Nieuwendyk.  When Nieuwendyk was hired, he considered his options and then fired coach Dave Tippett and replaced him with the fiery Marc Crawford.  So, the changes off the ice this summer were actually more impactful than the moves that affected the on-ice product.

Without further ado, let’s examine the Stars’ on-ice product and see what is in store for Dallas fans in 2009/10.

While the Stars are not going to be a Cup contender this season, the future looks bright in terms of some of the team’s prospects.  The likes of Jamie Benn, James Neal and Fabian Brunnstrom leave Dallas with potential for some impactful forwards for a long time.

That said, Stars fans still want to know if this team has a chance to win now.  With Mike Modano (39 years old) and Jere Lehtinen (36 years old) closing in on the end of their respective careers, Nieuwendyk and company will be looking for the two veterans to play a leadership role up front.  While the Stars may seem like a veteran team to some, Modano and Lehtinen are actually the only two forwards on the team’s roster that are over the age of 30.  That bodes well for the future development of the team, as there is a core in place that isn’t necessarily past its prime.

If the Stars are to rebound next season, the team will need another solid offensive season from Mike Ribeiro.  The slender center tallied 78 points in 82 games last season and led the Stars forwards in time-on-ice.  He’s not great at face-offs, or battling in the corners, but few players have the offensive skill and puck awareness of Ribeiro.

Along with Ribiero, Dallas boasts Brad Richards–he of Tampa Bay Lightning fame from the middle of the decade.  Richards’ stock has fallen since his Tampa Bay days, but he still can bring many things to the table.  He had 48 points in 56 games last season and won over 50% of his face-offs (50.6%).  He can skate well and is a tremendous passer.  Now, there are concerns about his defensive ability but the Stars know that.

So, up the middle, the Stars are actually quite strong (Ribeiro, Richards and Modano), let’s take a look at the wings.

The team’s number one winger and captain is Brenden Morrow.  It is really amazing to think that Morrow is already 30 years old–but, alas, he is.  The rugged winger goes to the dirty areas, takes a beating and comes right back for more.  Additionally, he has really turned into a reliable scorer.  After a slow start to last season (only 5 goals in 18 games), Morrow went down for the season with an ACL injury.  This season he’ll have extra incentive to prove himself–playing for Team Canada can do that to you–so, a return to his 2007/08 form (74 points in 82 games) is probably expected by many Dallas fans.

To complement Morrow, Dallas received a surprise breakout season from Loui Eriksson.  The 24 year old Swede came out of (relatively) nowhwere to score 36 goals last season.  His good awareness leaves him in the right position and the right time, but his wicked shot may be his biggest asset.  Eriksson’s emergence in 2008/09 allows the Stars to worry less about adding a top sniper on a team that has a fair amount of passers. 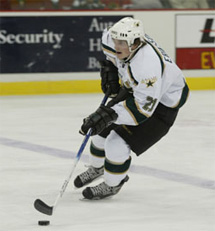 Loui Eriksson was a difference maker for the Stars in 2008/09 (Picture courtesy of hockeycentralen.se)

After Morrow and Eriksson, the Stars throw the likes of super-pest Steve Ott at you.  Ott actually has more “game” than people give him credit for and brings a much-needed physical presence to the table.  His 135 penalty minutes led the Stars by a mile, but management would probably prefer he cutdown on the unnecessary penalties–obviously easier said than done.

Combine the team’s aforementioned up-and-comers with the team’s veteran core and the Stars are a little more dangerous up front than some may think.  The team isn’t in the class of Detroit or Chicago in terms of firepower, but they should not be taken lightly either.

After more than a decade on the Stars’ back-end, it will be odd not seeing Sergei Zubov manning the blue line in Dallas this season.  With a cast of youngsters, Dallas fans realize this is where the real rebuilding is going to occur.

The clear leader of this group is Stephane Robidas, a player underrated by far too many, who plays every single game out there as if it is his last.  He logged 24:32 minutes per game in 2008/09 and will counted on to provide similar production this season.  The fact that he was an All-Star last season and an invitee to the Canadian Olympic orientation camp should not be overlooked. 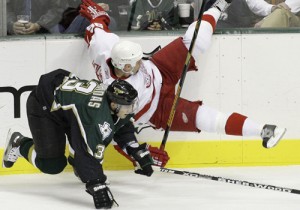 Stephane Robidas may be the best defenseman you don't know about (Picture courtesy of globeandmail.com)

After Robidas, the Stars possess a number of talented young defensemen.  In Matt Niskanen, the team gets offensive production (35 points in 2008/09) from a skilled 22 year old.  However, his offensive skill is offset by some of his defensive deficiences.  The Minnesota native was -11 on the Stars last season which was worst out of all the team’s defensemen.  Even so, he’s young and has room to improve–both offensively and defensively.

Along with Niskanen, the Stars have 24 year old Swedish defenseman Nicklas Grossman.  Last season Grossman struggled some and took a bit of a step back but Les Jackson (still highly involved with the Stars) and company still fully believe in Grossman’s abilities.  He can play a physical game (2nd on Stars defense in hits) and blocks a lot of shots (3rd in blocked shots) and brings many attributes to the table that will make him a fan favorite for years to come.

Along with Grossman and Niskanen the Stars have youngster Trevor Daley, a player that really came into his own last season.  Daley enters this season at 25 years old, although it feels like he has been around forever.  In 2008/09, Daley was the only other Stars defenseman who played significant minutes (aside from Stephane Robidas) that finished the season as a plus player (+2).  While originally thought of as an offensive defenseman when he came on the scene, Daley was actually the team’s most relied on player last year when on the penalty kill.  Additionally, he plays some on the power play, which is a testament to his two-way ability.

Filling out one of the final defense spots this season with be Mr. Reliable–Karlis Skrastins.  Some know Skastins for his long-time ironman streak, but he is also a very reliable defensive defenseman.  His shot blocking ability will be much appreciated by his teammates, who will grow to love him quite quickly.

The last spot on the Stars’ back-end will be battled for.  Among the contestants will be Jeff Woywitka, a solid cheap signing in my opinion.  Woywitka never turned into the dominant defenseman some thought he would be, but he skates very well, is a big guy and has fairly improved passing skills.

Joining Woywitka will be Mark Fistric, a solid player who relies on his positioning and awareness to get by.  Unfortunately, I think Fistric’s biggest drawback, his skating, needs to improve if he ever wants to get into the Stars’ top four.

Last season was simply a disaster for the Stars in net.  Marty Turco posted awful numbers– a .898 save percentage and a 2.81 G.A.A. in a very defense-first system.  It just seemed like Turco also found a way to allow a goal at just the wrong time, so the team is banking on him returning to his 2007/08 form (.909 save percentage and 2.31 G.A.A.).  Considering his past success, you’d have to think Turco returns to somewhere close to old form this season. 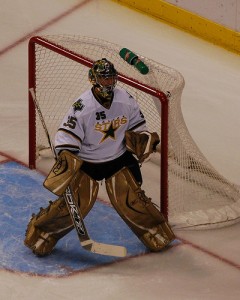 Marty Turco cannot possible be as bad as he was last season, can he? (Picture courtesy of Flickr)

Behind Turco, the Stars ran out Tobias Stephan last season.  It is fair to say that Dave Tippett did not exactly trust the young netminder, and the Stars have addressed the need for a backup (Turco needs more rest) by adding NHL veteran journeyman netminder Alex Auld.  Auld is not spectacular, but he’s serviceable.

Ceiling: The Stars stay relatively healthy, adjust well to Marc Crawford and see their young defense emerge quickly.  3rd in the Pacific Division and 8th in the Western Conference.

Floor:  The Stars don’t adjust well to an offense-first system, show their youth on a nightly basis and start pressing early in the season.  4th in the Pacific Division and 12th in the Western Conference.