Coyotes saga and the Stanley Cup celebration continue. Parise says no to NY.

The Stanley Cup Finals are now over, while there are no games, we’re now in that exciting time leading up to the draft and Free Agency. 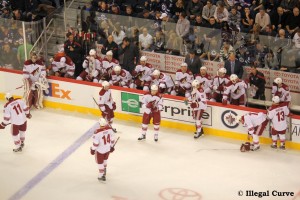 Arizona Republic: Goldwater Institute files lawsuit in Glendale’s Phoenix Coyotes deal. Goldwater is stepping in and not allowing the city to hand money over to Greg Jamison. Can someone put this franchise out of it’s misery already?

Globe & Mail: Goldwater Institute files lawsuit to block Coyotes arena lease agreement. More of the same here. If we didn’t have the Jets, this would be excruciating. The Thrashers moved to Winnipeg with the quickness of taking off off a band-aid, in one motion “right off”. The Coyotes have been the exact opposite. I’m so glad I don’t have the emotional investment in this that I would have had a year and a half ago.

SI.com: Kings will bring Stanley Cup to Wednesday’s Dodgers game. It is always interesting where the Cup goes. Apparently Dustin Brown drank chocolate milk out of it the other day. As Dave Chappelle once said while playing Rick James “it’s a celebration”.

NHL.com: Dustin Brown appears with Stanley Cup on the Tonight Show with Jay Leno. Not really a Leno guy, or even a late night talk show guy, but you knew one LA King would appear on Jay Leno, they gave it to the captain. Here’s the link in case you forgot to PVR it. Oh wait, you didn’t forget, because nobody PVR’s Leno.


Toronto Star: Former LA Kings Trainer drinks from 19-year-old beer saved from last finals appearance. Well the guy who drank it is still alive, that is good news for all of us who are saving our cans of “Jets Fan Brew” for when the Jets win the cup. (I still have one in the back of the fridge).

Fire & Ice: Parise wants to remain a Devil “no way” he’ll sign with Rangers. It appears negotiations haven’t started with the Devils. Let the Parise sweepstakes begin! I wouldn’t put much stock into what he says here, if they offer him a fat contract, it would be hard to say no. I mean, what is the guy supposed to say, he’s in the Devils building, cleaning out his locker after losing in the Cup Final. Is he really going to say, “oh hey reporters, it was a fun year, but by the way, I’m going to be taking the biggest contract offer I can get in two weeks and it’s going to be from our number one rival the New York Rangers…see ya!.”

Denver Post: Joe Sakic could be a Hall of Famer June 26. He becomes eligible along with Brendan Shanahan for induction this year. Both will surely get in. Other first year eligible players are Mats Sundin (yes), Claude Lemieux (maybe), Curtis Joseph (no) and former Winnipeg Jets Teppo Numminen. See the full list of first year eligible players. My favourite Joe Sakic moment was in the 2002 Olympics, I’ll never forget the Bob Cole call, “Joee Sakic….SCORES!”

The Hockey News: Is Luke Schenn on the block? Who cares, I’m sick of Brian Burke and the Leafs.

Sportsnet.ca: How the Devils made $32.3 million this post-season. For a franchise that is on the edge of bankruptcy, this is a nice cash injection. Today’s trivia question, how many hot dogs were sold at the Prudential Center since the beginning of the playoffs? The answer……22,925. Not even Kobayashi could eat that many.