Jets goalie will suit up for Team North America. 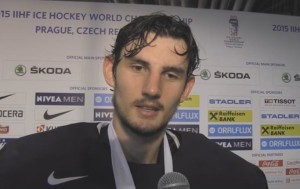 It shouldn’t come as much of a surprise that the Jets goalie of the future has been selected to play net for Team North America although somewhat ironically his team was listed as a generic AHL logo as opposed to Jets or even the Moose.

This team is comprised of players under 23 years of age.  Still a good chance that Mark Scheifele and Jacob Trouba could be added with seven roster spots remaining.