Let’s be honest. The Colorado Avalanche had a worse year than Pauly Shore last year. After finishing in last place in the entire Western Conference during the 2008/09 regular season (that’s right, that’s how bad it got), Colorado basically pulled a General Motors and slashed a huge portion of their managerial and coaching staff, albeit at various stages.  Greg Sherman was summoned to replace Francois Giguere as the team’s new general manager and ex-NHLer Joe Sacco was brought in to replace Tony Granato as head coach (Patrick Roy is still trying to find himself). The task ahead for these two men is not that daunting except when you factor in the whole rebuilding of a hockey franchise thing.

In addition, Hall of Famer and Colorado Avalanche/Quebec Nordiques icon Joe Sakic decided to hang up his skates this summer after 20 seasons with the franchise, a huge blow to a team that was hoping that by some miracle, Sakic could drink a magic elixir, sign on for one more year and return to his usual 100-point form.  Unfortunately, Burnaby Joe’s mid-season injury last year was a sign of bleaker things to come for the storied Colorado Avalanche franchise, who missed the playoffs last year for the first time since moving from Quebec City in 1995.

The new men in charge of the Avalanche are going to have to learn to be patient this season because this team will undoubtedly experience a sharp learning curve. How could they not, knowing that their supreme leader Joe Sakic, and his heir apparent, Ryan Smyth will not be around this year.  Yes, I know, Center Paul Statsny is a fantastic player and is at the right stage of his career to take over this team, but what about the rest of this group? The Avalanche have been gutted (eight regulars from last year are gone) and the remaining parts leave much to be desired.

Would it be wrong to say that keeping Tyler Arnason might have actually been a smart move?  Maybe not, because when you look at the forward depth chart for the Avalanche, it quickly becomes easy to find holes and question marks on almost every line.

The number-1 triumvirate of Paul Stastny between Wojtek Wolski and Milan Hejduk is a respectable National Hockey League line but it is not exactly Ryan-Getzlaf-Perry is it? Hejduk led the Avalanche in scoring last season with (yikes!) 59 points and although Wolski is a crafty winger, he struggled mightily last year when Joe Sakic and Paul Statsny when down with lengthy injuries. Clearly, Paul Stastny will be counted on as the offensive catalyst for this line, and the entire team for that matter.  Stastny has excellent vision on the ice and has a genetic predisposition for finding the back of the net on a nightly basis. If he stays healthy, Stastny has the potential to register 100 points this season, and he may very well have to, as the void left by Sakic and Smyth is huge. 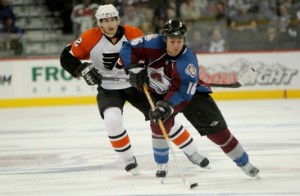 The success of Colorado’s forward group this season will have a lot to do with how well Joe Sacco and his coaching staff micro-manage the team’s uber-young second, third and fourth lines. There is some talent here, no question. Veteran Marek Svatos, Sophomore T.J Hensick and gritty winger Cody McLeod will most likely form the team’s second line, although it is difficult to tell at this point, as Sacco will tinker with his lines significantly beginning in training camp later this week. After that, Darcy Tucker, Chris Stewart, rookie center T.J Galiardi, and David Jones will form part of the team’s third and fourth lines.  The wild card here is 2009 1st Round Draft Pick Matt Duchene, a two-way forward who played with the Brampton Battalion of the Ontario Hockey league last season (57 games played, 31 goals, 48 assists, 79 points). The Avalanche were ecstatic to land Duchene at the Entry Draft in Montreal at the third overall position as they feel he might be a better all-around player than No.1 selection John Tavares.  Duchene will be given every opportunity to make the team this year as will University of Minnesota prospect Ryan Stoa.

Colorado has a lot of experience on defence but the team is lacking on speed and skill. Adam Foote, Scott Hannan and Ruslan Salei are grizzled veterans to be sure, but the physical component of the game is their specialty. American rearguard John-Michael Liles is Colorado’s No.1 quarterback on the power play and he will benefit from the acquisition of Kyle Quincey from Los Angeles, who enjoys the power play himself.  Quincey had a career year in 2008’09 in Hollywood (38 points) and has developed into a fantastic breakout passer. Tom Preissing, was also acquired in the Ryan Smyth trade, will look to rebound from an injury-plagued season. Preissing usually posts between 35-45 points so he should add some offensive flair to a group that will spend most of the time in their own zone this season.

Grade of Defensemen: B

Former Florida Panther Craig Anderson is the man in the Mile High city this year and he may see more rubber than a Colorado highway if all indications are accurate. The 28-year-old has always been relegated to 1A status during his career in the National Hockey League, but this year should be different as Peter Budaj  proved last year that he is not ready to be an everyday NHL goaltender, instead preferring to serve in a back-up role.  Anderson is a big, stand-up goalie who likes to handle the puck and get involved in his crease.  His .924 save percentage last season is pretty impressive when you consider the team he played for.  Budaj signed a one-year contract in the off-season and may split duties with Anderson early on, but NHL coaches are starting to steer away from this approach as it often has detrimental consequences.

Grade of Goaltenders: B

The Avalanche are not going to make the playoffs this year and the shelves have been left bare by a franchise that has preached win-now for the last decade-and-a-half. It will be interesting to see if talented prospects Matt Duchene and Ryan Stoa can make an impact in their rookie years.

Final Prediction (ceiling): 4th in Northwest Division, 12th in the Western  Conference, and a very interesting year ahead in the Rockies.


(floor): 5th in Northwest division, 14th in the Western Conference