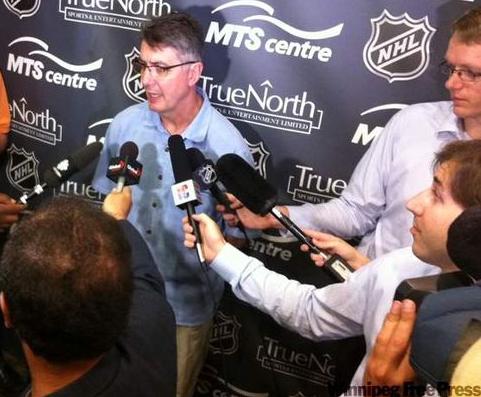 On what he liked in the 39 year old Vincent

“For me he’s a young enthusiastic coach who’s had some success in junior hockey, he’s a guy that was assistant coach with the national junior team. He’s well versed in a lot of tactical areas of the game, also on the powerplay which he’ll be responsible for, he had some good qualities as far as his character and he comes highly recommended by a lot of people.”

In the upcoming weeks, the Winnipeg Jets coaches will spend some time planning the vision for the team, and getting to know each other.

“We’re going to look to have meetings here in the middle of august, one of the things will be important for us will be to get to know each other, build ourselves a vision and decide where we are going to go with this team, we’ve got a lot of things to cover, it will be really interesting for us”

Coach Noel likes the diversity that he (age 55), Huddy (52) and Flaherty (43) bring with Pascal Vincent.

“I think we’ve got some good people in place, we’ve got youth, we’ve got experience in Charlie Huddy, who’s been an NHL coach and coached before at different levels, we’ve got a lot of diversity as far as the staff goes, we’re really pleased with what we have and what we have to offer.”

Having coached the past 12 seasons in the QMJHL, Vincent has experience working with younger players which will be an asset in developing the Jets up and comers.

“I think he relates, one of the things I liked about him, he’s a real people person, he’s a guy who can relate to teaching players, coaching players, he fits in our young group. Myself and Charlie, and Wade are a little bit older than Pascal, I think it’s a good mix for us, we could’ve gone with older guys, but I thought the mix was really good for us for what we wanted.” 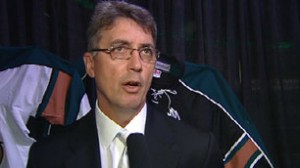 Coach Noel is doing his best to get in touch with all of the players and welcome to the team, but it is tough to do while everyone is taking time off in the summer.

“I’ve contacted a lot of players and still in the process; I’m caught being tugged in different areas. It’s really hard in the summertime you play phone tag, guys are in Europe, you text them first they don’t know who it is that’s calling. Very few players pick up the call, you’re always catching up and trying to contact players and trying to get through to them, it’s a real task, a real challenge.”

It appears that all of the players are excited about coming to Winnipeg, and playing in front of a full house every night.

“It’s been good, everything’s been really positive, the guys have been enthusiastic they’re really looking forward to getting started, to coming here and playing in front of an enthusiastic crowd and it shows in their conversations.”

While Coach Vincent coached goaltender Ondrej Pavelec in Cape Breton, that did not play a factor in his hiring.

“No that didn’t really figure in, he’s had him for a couple years, had a lot of success with him, he developed him and played him a lot, it didn’t really have to do with it. He came recommended, I liked what I heard, for me he was a guy who was a good choice, his youthful exuberance was something we looked at and we felt we needed in our staff.”

For now, it appears that the coaching staff has been filled.

“We may add someone later, but as it stands now we are staying with what we have.”

Listen to the audio of the press conference here