The big news in Winnipeg Jets land this morning was that the charges against Dustin Byfuglien for impaired boating were dropped. The bigger news is…well…Dustin Byfuglien. Mike McIntyre of the Winnipeg Free Press was on the scene in Minneapolis and tweeted this picture of the big man. 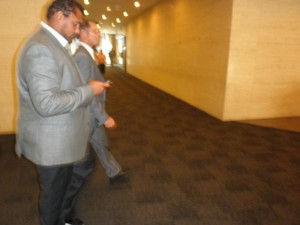 Byfuglien is listed on the Jets website at 6’5″ and 265lbs…sounds about right.

“In exchange for Nash, the Blue Jackets have acquired forwards Brandon Dubinsky and Artem Anisimov, defenseman Tim Erixon and a first-round pick, according to TSN. The Blue Jackets also send a third-round pick and a minor-league defenseman to the Rangers, The Dispatch has confirmed.”

Ranger Rants: Rangers set to acquire Nash– today. The Rangers look like winners in this deal, they acquired the best player in the swap and did not give up Derek Stepan, Ryan McDonagh or Chris Kreider.

Here’s the Twitterverse reaction to the Nash trade.

The Hockey News: Doan searches for new team. He’s met with the Flyers and Rangers but it seems that just about everyone is still in the mix.

New York Post: Visnovsky files grievance to have trade to Islanders voided. If I was traded to the Islanders, I would do the same thing.

Telegin out until September, Selanne back for one more year, other NHL News
Winnipeg Jets afternoon links