Mathieu Perreault is expected to miss remainder of regular season

Done till close to the end of the season. 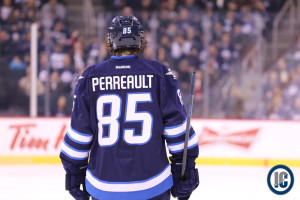 It was a somber coach Maurice who started off his presser today with the announcement that Mathieu Perreault will be out until the end of the season with “a significant lower body injury”.  He did qualify this by saying that he could return before the end of the regular season but that if so, it wouldn’t be much before.

Terrible news as #85 was having a great season for the Jets having contributed 18 goals and 18 assists in 56 games and really providing some depth to the forward group.

Good news for Jets fans was that coach Maurice informed everyone that Drew Stafford was “day to day” and would take the morning skate tomorrow in Washington.