In response to yet another injury to the Winnipeg blue-line, the Jets have acquired defenseman Jay Harrison from the Carolina Hurricanes, in exchange for the Ottawa Senators’ 2015, 6th round draft pick, previously acquired by Winnipeg at the 2014 NHL Draft. 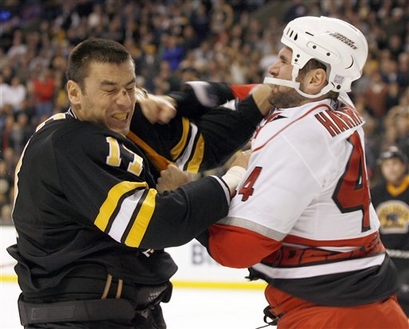 Harrison, 32 years old, has played 337 career NHL games with the Toronto Maple Leafs and Carolina Hurricanes. He previously played for Jets head coach Paul Maurice in Carolina, during Maurice’s second tenure with the Hurricanes. A prototypical, “stay-at-home” defenseman, Harrison has 70 points in his NHL career, along with 337 penalty minutes.

According to Illegal Curve’s own Richard Pollock, Harrison is a “big, left-hand shooting defenseman with decent skating ability, and puck-moving skills. Typically plays as a 3rd-pairing left-side defenseman.”

Thus far this season, Harrison has accumulated 1 goal, 3 assists for 4 points in 20 games. He has averaged 16:30 in ice-time for the Hurricanes in the games he has played this season.

He is in the midst of a 3 year, $4.5 million dollar contract, making his salary cap hit $1.5 million, this year and next, before he becomes an unrestricted free agent. According to Craig Custance of ESPN, the Carolina Hurricanes will retain 1/3 of the salary remaining on Harrison’s contract, so Harrison’s salary cap hit to the Jets this year will be $1.0 Million (pro-rated) for this season, and $1.0 million next year.

Another one bites the dust. Mark Stuart out till February
Breaking News: Evander Kane has lower body injury, out till early February