Another one bites the dust. Mark Stuart out till February

Stuart out until February. 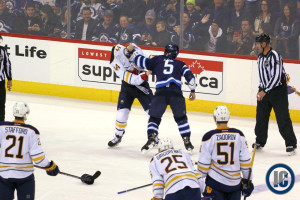 Sometimes you win the battle but lose the war as Jets fans learned today when the team announced that defenceman Mark Stuart would be joining his D partner Jacob Trouba on the sidelines until February.

According to Jets head coach Paul Maurice the injury to Stuart was a “lower body injury”.

This is the fifth injury to the Jets back end since Coach Maurice announced the trio of Clitsome, Enstrom and Bogosian were gone (Clitsome has since returned) on December 4th.