Behind the Mask with Jets goalie Michael Hutchinson 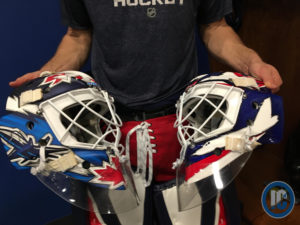 Yesterday we went Behind the Mask with Connor Hellebuyck and today it is Michael Hutchinson who gets to explain his helmet design philosophy.  When we spoke he had two helmets at his locker, his regular season one as well as the one for the Heritage Classic. 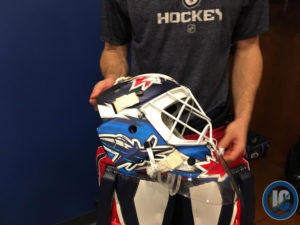 “I usually give my mask painter (David Leroux of Diel Airbrush) a couple of ideas of what I want to happen and I give him full creative control after that.  We did a matte mask a couple of years ago and I really liked they way that turned out so I thought it would be cool to go back to the matte finish.  After that I told him to keep it simple so it would be easy to see from far away, I’m not big on a ton of detail up close, I just like keeping it all team orientated on the mask.  He just took it and ran with it going with some pretty simple but cool ideas around the mask.” 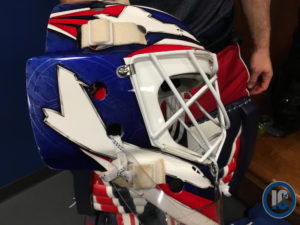 “I was at Shooters Driving Range this summer and we saw the mini golf area with the big statute of goalie Bob. Bob Essensa was my goalie coach for my first three years when I was with Providence so I thought it that would be kinda a cool tribute, especially with him coming back to play in the Alumni game.  So I shot him a text to find out his thoughts and he thought it would be pretty cool.  I told my mask painter to do a replica but if he wanted to throw a couple of twists here and there he could.  So there is a little more detail up close including the logo from the heritage jersey we are using which is faded into the back of the mask.  I think it is really sharp and a really cool throw back.”