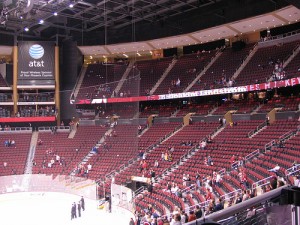 If Balsillie wins his bid for the Coyotes, a season of sparse crowds is expected. (Picture courtesy of flickr)

Canadian billionaire Jim Balsillie has pledged to keep the Phoenix Coyotes in Glendale this season if he wins an auction for the financially troubled club.

His lawyers say the club would play in Glendale this season, which opens Oct. 3, but Balsillie still intends to move the team to Hamilton as part of his US$242.5 million bid.

Well, this really is not a surprise to me.  If Balsillie wanted this team as badly as he has said he does, then keeping the team in Phoenix for the season was a must.  I mean, how on earth was he actually planning on moving the team before/during the season?  That is simply an impossible task.

With this declaration, and with Judge Baum’s comments in the report, you have to think Balsillie’s chances are gaining steam.  Personally, I thought his chances were low from the outset, but he continues to prove me wrong, so I guess I will just have to stop betting against him.