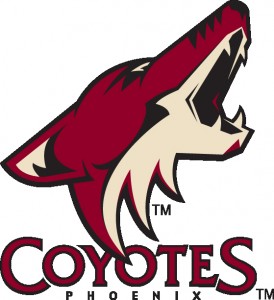 Where to start with the Coyotes? Lost amid all the summer hubbub is the fact that a young team with a great core calls the desert home. Despite a 36-39-7 record last season (79 points) and a 13th place in the West finish, the Coyotes have some pieces in place that should allow them to more forward should the find a home and/or have its’ affairs settled.

One of the bonuses of being a poor team for so long is the draft picks (ask Chicago). Off-ice woes aside, the Desert Dogs have been able to draft fairly well in recent years, with many of these picks finding their way to the NHL already. Kyle Turris, Peter Mueller, Martin Hanzal and Keith Yandle are all regulars on the team and are slowly but surely forming what should be a solid core. 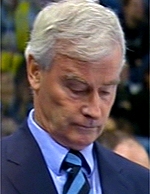 The recent addition of Dave King (seen here reacting to the news that he has been hired by the Coyotes) suggests that current coach and owner Wayne Gretzky (a former player himself) may be done with the team. If King is to take the helm, he will be counted on to use his considerable teaching skills to help along the young squad. Though the team is led capably by Shane Doan and features a host of talented young players, don’t expect the team to set the desert on fire.

Lets break the team down by position, starting with the forwards. 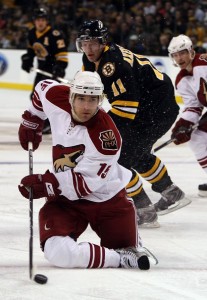 Led by the seemingly ageless Shane Doan (good thing the Oilers picked Steve Kelly), the Coyotes are blessed with excellent talent amongst their forwards corps. There has been significant off-season movement with the team, as they shipped out Garth Murray, Ryan Lannon, Nigel Dawes, Brian McGratton, Brandon Prust, Steven Reinprecht, and Enver Lisin. Replacing these skaters are Taylor Pyatt, Lauri Korpikoski, Vern Fiddler and Radim Vrbata.

While this provides a lot to talk about, it also makes it difficult to ascertain how the forward lines will shake out and who will mesh with who. Captain Doan (73 points last season) will most likely be a fixture on the first line, and could be centred by Matthew Lombardi. Coach King/Gretzky has a couple of options for the right side, as both Radim Vrbata and Peter Prucha would likely fit. The line provides the Coyotes with some offensive punch, and both Lombardi and Doan are responsible enough to go against other teams’ top lines.

My guess for the second unit would have deadline day acquisition Scottie Upshall on the left side, with youngster Peter Mueller up the middle and either of Vrbata or Prucha on the right. In what is more of a 1A line, Mueller will be counted on to take the next step offensively and be the straw that stirs the drink for this troika. Upshall will be given a larger offensive role with the ‘Yotes and the choices for RW are both capable of putting up points. In addition to taking on the soft minutes role, I would imagine that whoever is behind the bench will have these big bodies doing their fair share of forechecking. Upshall is a load and excels at the power forward game, and Mueller is no stranger to the aggressive cycle game.

So, you might wonder who is going to handle the tough minutes? Reinprecht is gone, and there isn’t an ideal candidate to replace him. Vern Fiddler is likely to get some time with this unit, having experience with the defensive side of the game. Martin Hanzal  is the most likely candidate for the 3rd line centre role. He is a responsible guy who is very aware of what he needs to do in his own zone, and can chip in on offense as well. Capable in the face off circle, watch for him to take draws on the PK as well. Rounding out the unit is more of a mystery. Rookie Mikael Boedkker could get a look, as could Daniel Winnik, who doesn’t produce much but is a grating player to skate against. Taylor Pyatt is also a good bet to get a look here (if not on one of the top two units), as he is another veteran who can play a variety of roles.

The fourth line could see any number of personnel getting a look. Highly touted youngster Kyle Turris was thought to be a good fit on this line, but has been demoted to the AHL. Rookie Brett McLean may get a look here given his offensive acumen, so might the speedy Kevin Porter, who showed very well in limited time last year. Viktor Tikhonov could find himself on the 4th unit too, as he is too talented to spend a lot of time on the farm, but isn’t quite consistent enough to crack the top 6. Also in the mix is Lauri Korpiskoski, whose versatility could be a boon here.

Though this group is a little light on experience, they can certainly all play and should be fun to watch. A tough guy might still be necessary here, and an actual checking line could keep them in a lot more games. I would think that the team will unfortunately play second fiddle to the courtroom for the time-being, so don’t expect any big changes til this is all resolved. 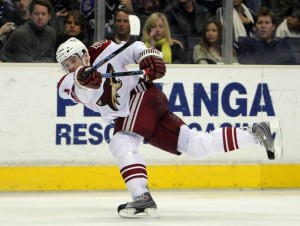 The blue-line is a little easier to figure out. Veteran Ed Jovanoski is the big dog for the Coyotes, and will see the lion’s share of ice-time should he stay healthy. Defenseman of the future Zbynek Michalek (pictured) will get every chance to skate with Jovo on the top pairing. He put up a respectable 27 points last season, and despite going -13, is a competent defender who is just getting better. Veterans Adrian Aucoin and Kurt Sauer form the most likely second pairing. Aucoin has lost a step but still possesses the big shot and plays a tough game. Sauer is more of an underrated type who will quietly help the team, who will need all the help they can get defensively.

The third unit will be the tough guy Jim Vandermeer, the resident heavyweight-by-default, paired with Keith Yandle the puckmover. Each player fills a specific role, tough guy and puck mover, and shouldn’t see a ton of ice time 5 on 5. Nevertheless, they should get plenty of action on special teams, as their skills sets are tailored to these niche roles.

Sami Lepisto and Jonas Ahnelov are prospects that may well get a look in top 6, and should fight it out for the 7th spot. Lepisto likely has the insde track, as he is 25 years old and has plenty of pro experience (though mostly in the Finnish league an AHL).

The defense seems to be a stable, if unspectacular unit. A little shy on the skating and puck moving skills so valued in today’s game, this group will be still be unpleasant to play against. I wouldn’t expect a lot of production outside of Michalek and Yandle, but they should get their fair share of PIM’s. 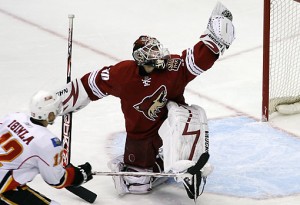 There are no real surprises expected between the pipes. Ilya Bryzgalov has cemented his status as the team’s number one goalie, and its very unlikely that he lets that status slip. Jason LaBarbera was brought in to compete for the backup spot with prospect Al Montoya. Fellow prospect Josh Tjordman is also in camp, but is expected to be sent out.

As you can see, Team Turmoil doesn’t have a great deal going for it right now. There is some talent there, but they aren’t likely to put it all together this season, even though the team held a playoff spot til the mid-way point last year.

I envision this team with a ceiling around 11th in the West. Most teams have made at least minor improvements to their team, and the Pacific is a strong division getting stronger as LA improves.

The floor for this team is unfortunately 15th, dead last in the west. Unless Colorado really tanks, these guys might find themselves being the doormat.