The Anaheim Ducks have had a relatively busy summer, shipping out one of their top 2 defenders and bringing in a host of new faces, including longtime Selanne pal Saku Koivu, and repatriating Joffrey Lupul. After an 8th place finish in the Western Conference last spring (2nd in the Pacific), the Ducks had a successful playoff run, losing in 7 games to the Detroit Red Wings. With a very good first line of Getzlaf-Perry and Ryan, plus an infusion of youth on the blueline, the Ducks will be looking to build on the playoff run by continuing their domination of the Sharks and getting back into serious contention in the West. 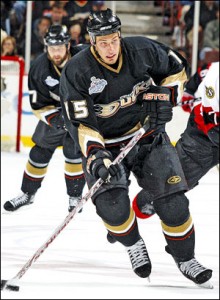 The Ducks are led by the aforementioned top line of Ryan Getzlaf, Corey Perry and Bobby Ryan. Though Getzlaf is still recovering from off-season surgery, he is expected back sometime in October, early enough to minimize any potential impact to the team. The trio combined for 88 goals last season, and are expected to improve those numbers this season with the added experience. A new look second line should provide the Ducks with some balanced scoring. The newly acquired Saku Koivu and the reacquired Joffrey Lupul will likely line up with veteran Teemu Selanne on the soft minutes unit. Koivu and Selanne are pals, so watch for potential chemistry between the two Finns. Lupul is reportedly very excited to be back out of the spotlight and into the sunshine in Socal, so his numbers might also improve.

The bottom six Ducks are a good mix of up and coming talent plus versatile veterans. Todd Marchant, George Parros, Ryan Carter (awarded a one way contract this year), Petteri Nokelainen, Erik Christensen (still injured) and the newly acquired Evegeny Artytukhin form the nucleus of the bottom lines, with agitators Mike Brown and Troy Bodie also figuring into the mix. Andrew Ebbett (though Ebbett’s 32 points in 48 games all but guarantee him time in the bigs) is still on a two-way contract, but is expected to figure into the Ducks plans sometime this season. Rob Niedermayer is still an unrestricted free-agent, and there has no indication as of press time on what his plans will be for next season.

Now that I have named everyone, let’s discuss the outlook in Anaheim. As mentioned, even with the Getzlaf injury, the first line is solid. Getzlaf and Perry have tremendous chemistry, and Bobby Ryan also fit in nicely. Should Ryan succumb to the sophomore jinx, there are plenty of candidates to fill the void on the top line. Selanne, Lupul or even Christensen (I believe he can play wing) could step in, and the Ducks have a host of talented youngsters waiting in the wings. Despite all the vaunt about the Sharks firepower, the Ducks are no slouches in that department. I would not be completely surprised to see the Ducks claim top prize in the Pacific should the Sharks falter, and former Disney boys have the skaters up front to do it. They have plenty of shooters and set-up men for the PP, and I expect Koivu to enjoy a resurgence with the Ducks.

Offense aside, they have a nice blend of talents beyond goals that all playoff teams need. Marchant has lost a step, but is still a competent checker. Parros is a noted pugilist and the rest of the guys are all willing to play dirty should the need arise. Add in the size factor (Artytukhin and Bodie are 6’5 and 6’4 respectively), grit and mix in some fresh young legs and it would seem that the 2007 Stanley Cup champs are ready for a return to prime time. 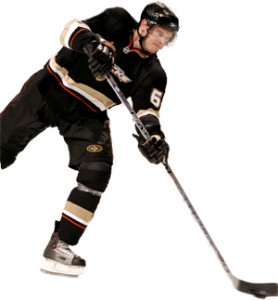 Naturally, the big story on the Anaheim blue line is the departure of the uber-dirty Chris Pronger (along with Huskins and Beauchemin). While I doubt the Ducks faithful are burning his baby furniture, his presence will definitely be missed as its not often you can replace a perennial all-star and Olympian. That is not to say that the back end is a weak spot for the team. Scott Niedermayer will still be patrolling the point, likely with a little bit more pep in this Olympic year. Nick Boynton has been signed to replace some of Pronger’s grit and meanness, and Lucas Sbisa is a promising addition to a defensive corps that is now pretty young outside of Niedermayer and Boynton.

Puck mover Ryan Whitney and the surprisingly offensive (in a good way) James Wisniewski are the primary offensive weapons once you get past Niedermayer, and all figure to see big minutes on the powerplay. Both skaters will be counted on to replace some of the offense of the departed Pronger. Brett Festerling and Sheldon Brookbank should likely both see more games than last season, and newcomers Lucas Sbisa, Brendan Mikkelson and Brian Salcido should also figure prominently in the Ducks plans this season. Mikkelson is a highly touted prospect that could see an increased role should he learn the position quickly. Watch for Sbisa to get most of that time, however, since he has some pro experience and he is one of the keys to the Pronger deal.

The Ducks have also added journeyman Steve McCarthy to the mix for more of veteran presence. Though not projected in the top 6, McCarthy will provide some insurance to the team. He spent last season in Russia, but has amassed over 300 NHL games and was once thought to possess some offensive upside. If any of the youngsters falter or injuries beset the Ducks, watch for him to get some time. 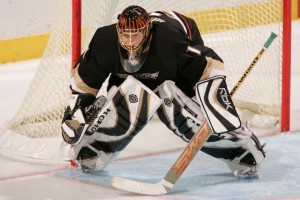 There isn’t too much in the way of news in regards to the Ducks goaltending. True, they did acquire Justin Pogge from Toronto, but it remains unclear if the former World Juniors standout will have an NHL career. The one possible change in the Ducks net involves playing time, where it is rumoured that former backup Jonas Hiller will become the de facto starter this season ahead of J.S. Giguere. Both goaltenders saw action in 46 games last season, with nearly identical minutes played. However, Hiller had a significant advantage in every thing from GAA (2.39 to 3.10), Wins (23 to 19) and Save Percentage (.919 to .900).

With a younger defense, it does seem plausible and likely that the Ducks coaches will go with the steady influence of Hiller between the pipes. That said, Giguere is a fiery competitor and will be pushed by both his down season and the presence of Pogge in camp.

Ceiling– If everything goes right and the new-look defense holds, I wouldn’t be surprised to see a first place finish in the Pacific Division, and the top 3 seed that goes with it. I think the Ducks match up favorably against the Sharks, Stars, Kings and Coyotes, and can skate with any team in the West

Floor– I would be shocked if they fell any further than 8th or 9th in the West. This is a veteran club buoyed by some playoff success. Despite the loss of Pronger, they have added some firepower up front and they are still solid on the back end.