CBC:  Jets fever everywhere.  Was out for breakfast this morning and there were at least 3 or 4 guys wearing Jets hats or shirts.  The city is gripped with the fever.

Yahoo Sports:  Mike Modano isn’t aware he’s supposed to be retired now.  Having watched him play in Detroit I actually thought he still was able to contribute but I would agree that he could have had one of the best exits from the game in history had he retired following the Dallas Star/Minnesota Wild game in which he donned a North Stars jersey and saluted the crowd. 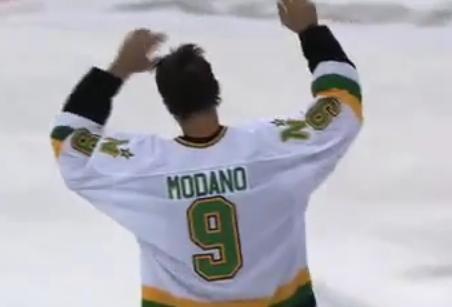 Montreal Gazette:  Plenty of off season action this summer.  Red Fischer takes a look at all the moves in the Eastern Conference and how it might affect each team.  Doesn’t appear he thinks much will happen in Winnipeg, aside from jubiliation for the team’s return.

National Post:  Shannahan prepares for new role as NHL disciplinarian.  Its like putting the fox in charge of the hen house as Shanahan was known for breaking a rule or two back when he played.  Of course knowing the ins and outs of League justice might help in his new position.