Columbia Daily Tribune:  Can’t put a price on NHL passion.  Exactly.  You can’t quantify passion.  For all the doubters (and there were many) that the NHL wouldn’t succeed in Winnipeg, the city took exactly two minutes in June to prove them wrong.  Next those same naysayers will point to sustainability, but I think True North has done its homework and this city will be an NHL market forever, ever, ever.

Arctic Ice Hockey:  The Maple Street Press Winnipeg Jets Annual.  The 1st ever Jets annual is ready to be ordered and hits newsstands on September 13th.  IC contributed with Arctic Ice Hockey to put out this really good publication. 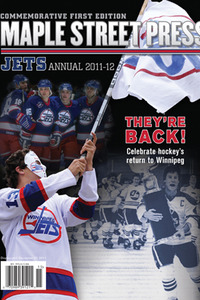 Jet Fuel:  Winnipeg Jets fan documentary.  Documenting a road trip to capture the passion of Jets fans while at the same time partnering with Believe in the Goal charity to add a worthwhile component to an interesting project.

Globe and Mail:  NHL needs Crosby says Lightning star Steven Stamkos.  A lot of people who have not yet had their NHL Winnipeg Jets season tickets selection draft (yours truly included) are very interested to know what it happening with #87 before they chose a Penguins/Jets game.

The Score:  Ovechkin hocking candy bars (video).  Expected it to be funnier although his grin is always funny. 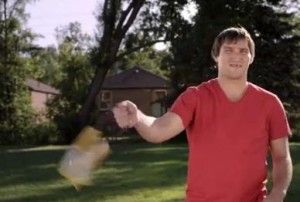 More after the jump including old Oilers trying to learn new tricks and Joel Quenneville’s attempted singing of Take me out to the Ballgame.

Edmonton Journal:  Moreau, Strudwick, Pisani, Staios – any use for old Oiler warriors?  Of this list, I’m most surprised that Pisani is still looking for work.

Yahoo Sports:  Joel Quenneville’s tone deaf ‘Take me out to the Ballgame’(video).  Better he should give up singing and continue to focus on coaching.