Sportsnet:  Blueline hardball.  Perhaps Bogo and the team will just sign a short term, feel each other out contract, before they attempt to get anything long term done.

The Hockey News:  Rumour roundup – Kostitsyn’s comments.  Would he look good in a Jets jersey?  Won’t know until we see what the jersey actually looks like.  Right now all we have is rampant speculation (case in point the jersey shown below).  As for Kostitsyn, we won’t know anything “official” until we get a release from True North. 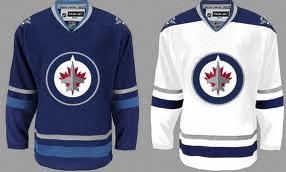 ESPN:  Who should be the next star of ’24/7′?  The HBO series was quite incredible to watch last year during the lead up to the Pens/Caps Winter Classic and if it is indeed the Flyers/Rangers next season, there will be quite a number of characters who could lend the project star power.  Who would you like to see?

More after the jump including prep hockey, Habs signing and is Semin an endangered species?