Globe and Mail:  NHL set to play preseason games all over the world.  Anyone want to see the Jets play in Charlotte, N.C?

SportingNews:  Canadian hockey scribes return fire after Kovalev criticism.  I liked this line from Wayne Scanlan of the Ottawa Citizen.

“Admit it, Ottawa media. We are a beer-smuggling, non-hockey-watching lot. And still, we work harder on game nights than Alex Kovalev.”

Pittsburgh Post-Gazette:  The furry thing and the draft.  So many jokes so little time.  Still nothing concrete about whether or not Pittsburgh will be hosting the draft next year.

Globe and Mail:  What rules will the NHL test at its R&D camp?  Wow, those are some serious tweaks.  The offsides rules are especially interesting.  What change appeals most to you as a fan?

Washington Examiner:  Caps hire John Walton as new radio broadcaster.  Even when it comes to broadcasting, the Caps still develop their talent via the AHL.

Yahoo Sports:  On 23rd anniversary of trade, Bruce McNall and the ‘Gretzky tax’.  That goes in the “I did not know that” category.  Gotta give McNall credit, that idea had moxy. 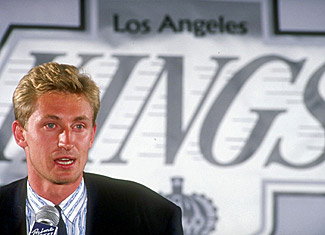