Note: We would like to wish all the veterans out there a good and healthy Remembrance/Veterans’ Day, wherever you may be. Thanks very much for your service, past and present.

Before reading my trite and fairly obvious observations, take a minute (1:01) to view this video from Veterans’ Affairs Canada. 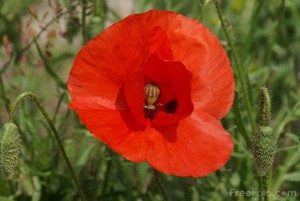 Since I am feeling a little warm towards the Wild today, which is somewhat out of character, I found two little plays featuring Minnesota players to highlight a couple of points in today’s Afternoon Analysis.

The first play features Wild defenseman Brent Burns. The video, found here, shows Burns making a poor pass at the blue-line while his team was on the powerplay. That the pass is a bad choice is fairly obvious, but Burns recovers nicely to break up the Toronto 2-on-1. Burns, seeing that he is facing an odd-man rush with the man to his left carrying the puck being a left-handed shot (John Mitchell), backs into his zone in a way that effectively negates the pass option (his job as the defender) AND angles the Toronto player into a tough shooting spot.

When he sees he has the advantage space-wise, Burns slides to the ice to all but completely block any chance of a pass across the slot. This also puts the puck carrier in a bad position consider he has run out of space and has to either make a lateral move across the ice (not as easy as it looks) or force a high-risk pass or low-percentage shot. The player to Burns’ right was also a left-handed shot (Nik Hagman) thus making the chance of a successful pass and shot even lower.

Though I typically am not in favor of the defender leaving his feet in this situation, Burns has played the opportunity well enough to be reasonably sure that he has the Toronto forward cornered. No danger comes of the rush and the Wild are able to turn the puck back up ice and score. Burns’ ability to think on his feet and make a sound decision are the key to this play.

The second play I was Wild-on (sorry, Brooke Burns flashback) features Andrew Brunette displaying the skills that only a wily veteran would possess. After a face-off in the Toronto zone, the puck squirts into the corner and then behind the net. Brunette wins a race to the puck and is set upon by two Leafs. Brunette uses his body to shield the puck here and thus absorbs a check/cross-check from Luke Schenn and what I can only assume is a really dirty look from Mikael Grabovski (who can’t actually bring himself to touch Brunette). By shielding the puck, Brunette is able to advance behind the net and get it out front, where Mikko Koivu eventually scores.

Again, a really simple little play where Brunette just gets his body between the defender and the puck and keeps it that way. Schenn is unable to knock him off the puck or impede his progress and a goal is scored.

A tip of the cap to the Wild from AA for a couple of smart plays.