Getting you set up for Game 1 between the Jets and Oilers.

So many questions marks for the Winnipeg Jets heading into game one of their series against the Oilers when it comes to health of their players.  Andrew Copp skated in a non-contact uniform but declared that he’d be ready for game 1 and took line rushes in practice yesterday.  Whereas Nikolaj Ehlers was also in a non-contact jersey but not taking line rushes on Tuesday and Pierre-Luc Dubois wasn’t even on the ice. 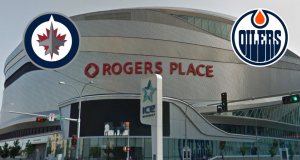 As per Tom Gazzola of TSN 1260 Edmonton there has been a Pierre-Luc Dubois sighting although he is, not unexpectedly, wearing a yellow non-contact uniform as is Nikolaj Ehlers.

Head coach Paul Maurice confirms that Nikolaj Ehlers and Pierre-Luc Dubois will not play tonight in game 1. He wouldn’t confirm any other lineup news so for now the projected lines and D pairs will be based on yesterday’s practice although it seems like he could be a toss up between Jansen Harkins and Dominic Toninato since Harkins reportedly stayed on the ice for extra work. Which means stay tuned for warm up skate for confirmation around 7:30 PM.

1) Lineup clarity
2) Was there a setback for Pierre-Luc Dubois?
3) Lack of power in the power play.
4) How much is he expecting of the role special teams will play?
5) Does he look back at the way the Hawks generated vs the Oilers last year?
6) How important will it be to control emotions in the first 5-10 minutes of game?
7) What’s he looking for from his second line?
8) Line blending
9) Role in front of the blue space.
10) Mason Appleton’s role.
11) Is there any relevance to how you finish the season or how you did vs a team when playoffs start?

Winnipeg Jets Morning Papers
Connor Hellebuyck vs Mike Smith: Who has the edge in net for Jets and Oilers series?