Question and Answer from the Media Scrum: 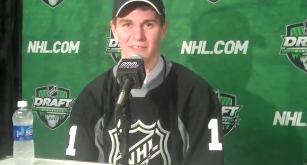 MARK SCHEIFELE:  You know, in the draft there’s always picks that aren’t expected.  Some people go later.  So for me to go early is definitely a dream come true of mine.  I’m just so happy right now.

Q.  One year for you in the Ontario Hockey League, can you tell us a little bit about it?
MARK SCHEIFELE:  I got traded to Barrie mid-August last year.  I was still committed to going to Cornell.  After listening to Dale in person and listening to his stories, I decided to sign with Barrie and play with them.
It was definitely a tough year not getting the wins we wanted.  So it was tough team-wise, but personally I tried to work my hardest and give it my all every game and every practice.  Keep on developing, and keep on learning from Dale.
Dale was a great person to learn from just because he knows the game so well, and he’s such a great person to learn from.  So he definitely helped me a lot.  I think my hard work and determination really helped me throughout the year.

Q.  How do you?
MARK SCHEIFELE:  It’s Scheifele.  So, yeah, I didn’t really get a huge indication.  I didn’t think I was going to go 7, but to go 7 is really exciting.

Q.  Heard any stories about Winnipeg?
MARK SCHEIFELE:  I heard a few.  I heard he always told me about the big Queen Elizabeth they used to have, and how it’s really cold.  So he was actually kidding around.  He said if you get drafted by Winnipeg, they’re going to bring a parka instead of a jersey.

But I hear it’s a great organization.  He loved it there.  I think he was there nine years and he was captain.  He had a great time there.  He said it was an unbelievable organization to play for, so I’m very excited.

More from the Q & A with the 7th pick after the jump.

Q.  Strong representation by the fans cheering here in the arena?
MARK SCHEIFELE:  It was definitely really cool to have that many fans here and hear them screaming.  The one guy told me back at the arena in Winnipeg they were going bonkers.  So it’s great to have a great fan base, especially here for Minnesota so far away.  So it’s definitely great to see that.

Q.  What can you do to get better to be an NHL player right away?
MARK SCHEIFELE:  Definitely my strength is number one right now.  I’ve been in the gym a lot since the combine.  I’ve been in the gym since I got back from Germany.  I think strength is my number one right now, and skating is also another thing I can improve on.  But as I get stronger in my legs and my skating will come.
Just to keep working on every aspect of my game.  Working on my shot as much as possible, and get it ready for the NHL level.

Q.  If you look into the crystal ball, do you know what it would be like in your first game against the Montreal Canadiens?
MARK SCHEIFELE:  I kind of see it.  I can see it being really crazy.  I can see it being definitely an exciting day for the franchise.  I hope I can be there.

Q.  (Indiscernible)?
MARK SCHEIFELE:  I think it was just keep on learning every day.  Like I started off the year maybe a little timid, a little not sure where I was.  But as the year went on I just wanted to work hard.  I worked hard last summer to be able to be here right now.
I think just hard work throughout the year.  I was doing video probably three times after every game with the coaches and doing it by myself.  I think it was just working hard and working on my game and learning from Dale, learning from everyone was the main thing.

Q.  Were you surprised at all?
MARK SCHEIFELE:  Yeah, that was an intriguing factor that Dale brought up to me in our meeting when I talked to him last year in August.  He said, you won’t be able to play against these guys like these good of players like Hishon and Gudbransen and all these great players that have gone through here.
To see all the guys that have gone through like Jeff Skinner, Taylor Hall, Tyler Seguin, to see what great players have been produced out of the OHL just made up my mind and kind of intrigued me going into the OHL.  To know it’s such a great program there throughout all teams.

Q.  What was your favorite team prior to today?
MARK SCHEIFELE:  My favorite team was always Detroit, but now it’s definitely Winnipeg.

Q.  When did you first play hockey?
MARK SCHEIFELE:  It was probably when I was three years old.  I was skating on a pond by my cottage.  My dad took me and my brother out and taught us how to skate and how to play hockey.