Zach Bogosian underwent surgery today to repair an injury to his wrist, and the Jets released the following statement.

Zach Bogosian underwent surgery today to repair an injury to his wrist, and the Jets released the following statement: 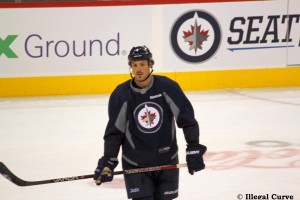 The Winnipeg Jets Hockey Club would like to issue the following statement from Jets head physician Dr. Peter MacDonald following surgery on defenceman Zach Bogosian this morning at the Cleveland Clinic of Ohio:

“After speaking with Dr. Thomas Graham this morning, surgery on the chronic ligament tear in the right wrist of Winnipeg Jets defenseman Zach Bogosian was successful. The prognosis for a return to hockey from this type of surgery is typically between four and six months.”

“We are pleased the procedure on Zach’s right wrist was successful this morning. This wrist has been an issue which has troubled him for the past couple of seasons dating back to his tim ein Atlanta and forced him to miss games with the Jets last season. After resuming his on-ice training earlier this month, the wrist problem flared up again to the point surgery was deemed the best option by both Dr. MacDonald and Dr. Graham. While we are disappointed Zach will be out for an extended period of time, we look forward to getting him to Winnipeg to begin his rehab with our training staff and getting him back on the ice as soon as possible.”