The 2nd overall pick chats in advance of his first game 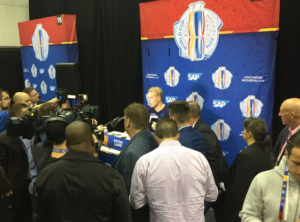 Tweets via Mark Masters of TSN:

– Patrik Laine on facing Matthews: “I don’t really care. I just want to have a good tournament. I don’t want to think about other players.”

– Patrik Laine believes #WCH2016 is perfect way to launch pro career bc after going thru this the pace in the NHL won’t be a surprise.

Lots of articles about Laine as folks turn their attention to his first regulation World Cup of Hockey game that counts:

Toronto Sun:  Patrik Laine gets first chance to prove he should have been No. 1.  Something tells me we will be reading about this rivalry for the rest of their respective careers.