Big man moved up to forward.

If we have learned anything in Winnipeg it is that Dustin Byfuglien prefers to play defence.  While he may jump up to forward, if injuries force coach Maurice’s hand or if he joins the rush, the big man is most comfortable patrolling the blue line for the Winnipeg Jets. 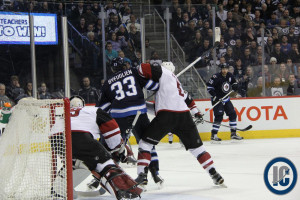 After two exhibition games with Team USA at the World Cup of Hockey it appears that coach John Tortorella is reverting to the formula of using Byfuglien as a forward.  Here are the line rushes at today’s practice according to Stephen Whyno of the Associated Press:

Following skate when asked why he moved Byfuglien up to forward coach Tortorella indicated “the U.S. viewed Dustin Byfuglien as a “wild card” and wants to see other 6D, hence Buff at forward.”

It will be interesting to see how the experiment works out for Team USA.  The Americans take on Team Finland tonight at the Verizon Center in Washington, DC at 6 pm central time.