The Jets just announced that they will be playing an upcoming preseason game against the Bruins one province over.

The Jets just announced that they will be playing an upcoming preseason game against the Bruins one province over.  The only member of either team who is from Saskatoon is the Winnipeg Jets James Wright.  Here are the details from the Jets:

The Winnipeg Jets, in association with the Credit Union Centre, are pleased to announce they will face the Boston Bruins in a National hockey League preseason game at the Credit Union Centre in Saskatoon, SK on September 27, 2013. This game is the rescheduled match-up from the 2012 exhibition schedule. It will be one of two pre-season games taking place in Saskatoon with the Ottawa Senators facing off against the Calgary Flames on September 16, 2013.

“The Winnipeg Jets look forward to visiting Saskatoon and playing an original six opponent in the Boston Bruins” said Kevin Cheveldayoff General Manager of the Winnipeg Jets. “We hope to have lots of support from Jets fans throughout Saskatchewan and are excited to play in Saskatoon.”

The Saskatoon Blades season ticket holders will have the first opportunity to purchase tickets followed by Mastercard Memorial Cup package holders in a pre-sale where fans can buy an NHL Game Ticket with a Blades ticket prior to the Wednesday, March 27th 10:00am general public on-sale. Ticket prices are $42.50 to $92.50 (plus service charges) and are available through all Ticketmaster outlets, on-line at Ticketmaster.ca, by calling 938-7800 or 1-800-970-7328.

The remainder of the Winnipeg Jets 2013 Preseason schedule will be announced at a later date. 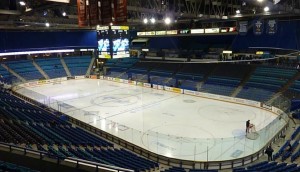