The on ice portion of training camp kicked off today at the MTS Iceplex, the arena was packed with fans wanting to see their new favourite NHLers on the ice. 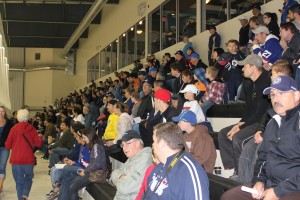 First to speak to the media was recently signed Zach Bogosian. When he spoke to the media yesterday, he said that the first item that he purchased was a new XBOX. The 21 year old talked about the excitement of the fans at camp, the information session they had on concussions as well as his thoughts on how he felt on the ice.

Listen to the audio from Zach Bogosian here

After the jump, we ask Ondrej Pavelec about his new mask and Chris Thorburn about his role on the team for this season

After all of the hoopla a few weeks ago about Chris Masons Iron Maiden mask, I thought it was only fair to ask Ondrej Pavelec about his mask. Listen to Ondrej’s response here. 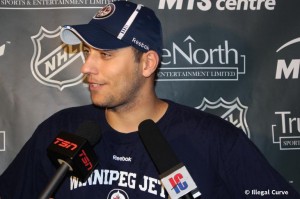 After writing this article about the Winnipeg Jets fighters, I spoke with Chris Thorburn about his thoughts on dropping the gloves this season:

“We’ll see what happens, I’m the kind of guy that likes to stick up for my teammates and do whatever I need to do to stay in the lineup and change the course of a game. If that means fighting, so be it. I don’t want at myself as just a fighter, I want to be able to contribute offensively, and use my skills and my size to my advantage. Whatever it takes to make the team better and help us win, I’m willing to do that”

On his decline in fights the past three sesaons:

“I’ve got more opportunities as the years went on. I’ve played bigger roles on my team, rather than being that 4th line five minutes guy. Instead of going out there and sparking energy by a fight or a hit, I’m out there killing penalties and doing some other stuff that helps the team win as well. I’m not too sure what my role is here, but hopefully it will continue as far as getting some penalty kill time, we’ll see what happens as far as the fighting goes.” 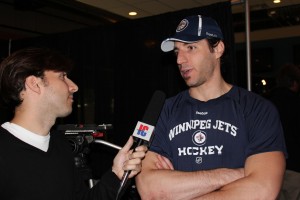 The atmosphere at the Iceplex was unlike any other for the practice.  The fans gave a loud ovation when the players came on to the ice, as well as cheers for nice goals and nifty moves. At the end of the practice a “Go Jets Go” chant broke out, which gave a few players  “goosebumps”.