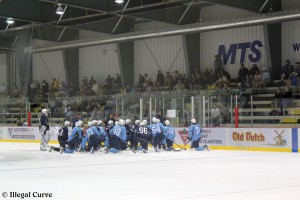 The Jets released this news today:

The Winnipeg Jets are pleased to confirm their participation in the Vancouver Canucks 2013 Young Stars Classic taking place in Penticton, BC from Thursday, September 5 to Monday, September 9, 2013. The round-robin tournament will feature prospects from the Jets, Vancouver Canucks, Calgary Flames, Edmonton Oilers, and San Jose Sharks.

“We are pleased to have our prospects attend the Young Stars Classic in Penticton for the second time,” said Winnipeg Jets General Manager, Kevin Cheveldayoff. “This is a prime opportunity for us to get a closer look at our prospects in game situations as well as evaluate their development over the summer months.”

Players who suited up for the Winnipeg Jets in their first Young Stars Classic were 2011 draft picks Mark Scheifele, Adam Lowry, & Austen Brassard as well as Zach Redmond, Eric O’Dell & Eddie Pasquale. The Jets finished the 2011 tournament with a 2-1 record and Mark Scheifele was the team’s leading scorer after three games (2G, 1A).

The festivities will include a Canucks alumni game against other Young Stars teams’ alumni and local police and fire department members, a Canucks Business Leaders’ Day, a Minor Hockey Day, and a Canucks alumni and team personnel meet and greet. Minor Hockey Day will include a Party on the Plaza event with games, food, music and entertainment as well as skills and development camps for BC minor hockey players. For more information about the Young Stars Classic and surrounding events, please go to canucks.com/youngstars. 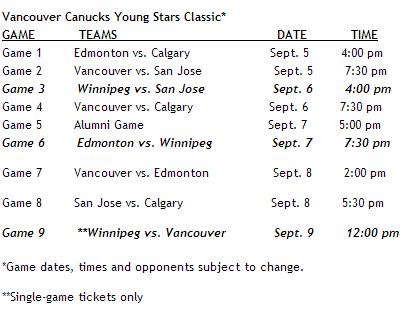