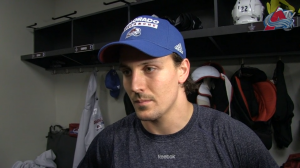 It may not be the signing folks in Winnipeg were expecting to hear with RFAs Laine, Connor and Comrie still to be signed but today the Jets added veteran Gabriel Bourque to the fold.  He spent last season in Colorado playing in 55 games for the Avalanche.

The Winnipeg Jets announced today they have agreed to terms with forward Gabriel Bourque on a one-year, two-way contract with an average annual value of $700,000 in the NHL.

Bourque, 28, played in his eighth NHL season and his third with the Colorado Avalanche in 2018-19 and had eight points (2G, 6A), in 55 games. The Rimouski, Que. native added a goal in 12 playoff games for Colorado. Bourque finished second among Avalanche forwards in shorthanded time-on-ice per game with 2:30 per game in 2018-19. The former Nashville Predator has played 361 NHL games for the Preds and Avs and has recorded 97 points (38G, 59A) and he has added eight points (6G, 2A) in 33 playoff games.

Bourque was drafted in the fifth round (132nd overall) by Nashville in the 2009 NHL Draft.